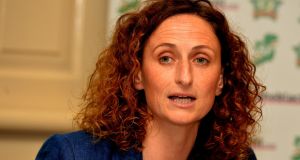 Sinn Fein MEP Lynn Boylan said this legal opinion is leaked at a time when Fine Gael and Fianna Fail are being forced to speak to one another. Photograph: David Sleator/The Irish Times

Fianna Fáil has insisted it will abolish water charges despite legal advice given to Irish Water warning there is no possibility under European law for the State to suspend or scrap the charges.

The party came under renewed pressure yesterday (Tues) to outline its position on the levies after details of the legal advice provided to Irish Water became public .

He said: “We absolutely contest the legal advice being put forward by Irish Water.

“It is important to recognise that this legal advice was commissioned by Irish Water, and it should be examined with caution in light of this.

The legal advice commissioned by Ervia, the parent company of Irish Water, argues that there is no option under EU law to return to the practice of not charging for water. The advice was delivered after the recent general election.

It says the default position in the EU directive is that member states must recover the costs of water services. Water-pricing policies are intended to contribute to environmental objectives, it adds.

The position places a great deal of pressure on Fianna Fail, who has insisted it will abolish charges if in government. Mr Fleming said there is no reason to conclude this cannot be done by a future government.

He said: “In fact, we believe it is entirely possible for the next government to suspend water charges and invest in our water infrastructure.

Sinn Féin MEP Lynn Boylan called on the company to publish the advice given to it by senior counsel Garrett Simons and Michael M Collins.

She insisted the advice did not tally with that of the European Commission and claimed the information was being published to suit the political agenda of certain parties.

“It is very suspicious the timing of this leaked legal opinion because it falls nicely into the hands in terms of forming a government for Fianna Fail to get them off the hook and say ’it is nothing to do with us, it is the legal opinion’,” she said.

“I would be very suspicious of the timing of this leak. If Irish Water have nothing to hide then let us see the legal opinion.”

Ms Boylan claimed the legal opinion, details of which were published in yesterday’s Irish Times, was being leaked at a time when Fine Gael and Fianna Fail were being forced to speak to one another.

Anti-Austerity Alliance TD Paul Murphy said 70 per cent of the electorate had voted for parties in favour of abolishing water charges.

He said in response Irish Water had “engaged in a desperate rear-guard action to try to maintain itself”.

Mr Murphy said: “I don’t trust Fianna Fáil as far as I can thrown them. The only way to ensure abolition is to do two things. One is to step up the boycott and the second thing is we need a massive, united demonstration on the streets.”