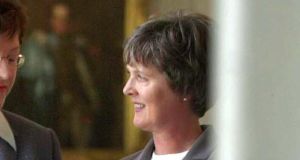 Prof Yvonne Galligan of Queen’s University Belfast is chair of Fianna Fáil’s Markiewicz Commission, which has been asked to address the under-representation of women. Photograph: Eric Luke/The Irish Times

Fianna Fáil has been urged to take the lead on gender balance in the next general election and field a higher proportion of strong women candidates than its rivals.

Prof Yvonne Galligan of Queen’s University Belfast is chair of the party’s Markiewicz Commission, which has been asked to address the under-representation of women in the party .

Prof Galligan made a presentation to the party’s TDs and Senators at its parliamentary party meeting earlier this week. Referring to the new gender quotas introduced by the Government for the next election, she said that nine EU countries have such systems in place and they have worked well.

The new rules in Ireland mean that funding for parties will be reduced by 50 per cent unless at least 30 per cent of candidates were women.

Prof Galligan said that will mean Fianna Fáil will have to run at least 25 female candidates, if it runs 80 candidates in total, in the next election – double the number of women it ran in 2011.

“The party that embraces this new reality will have an edge with voters,” she said.