Fianna Fáil unlikely to close gap in vote for Taoiseach 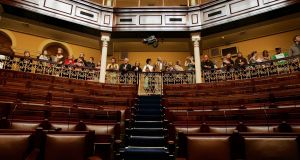 Fianna Fáil leader Micheál Martin is unlikely to bridge the gap of 13 votes between him and Fine Gael leader Enda Kenny when the vote for Taoiseach takes place on Thursday. File photograph: Aidan Crawley

Fianna Fáil leader Micheál Martin is unlikely to bridge the gap of 13 votes between him and Fine Gael leader Enda Kenny when the vote for Taoiseach takes place on Thursday.

Notwithstanding a big effort by Fianna Fáil to muster support from Independent TDs backing Mr Martin’s attempts to become Taoiseach, the likelihood is that the 30 Independents and smaller parties will either abstain or vote against the nominations of the two biggest parties.

The source said it was essentially a “box-ticking” exercise and the real negotiations on a new government would not begin in earnest until after Easter.

That would suggest a new government, in whatever shape, might not be formed until late April or early May.

However, the Fianna Fáil source said the average time it took to form a government in most European countries was between 28 to 32 days.

This is despite strong misgivings about that strategy voiced at the Labour central council meeting held this weekend.

Some members said the party should abstain or vote against the nomination after its defeat in the election, and as it was going into opposition.

Some members also criticised Labour for being too closely aligned with the Fine Gael message during the campaign.

However, the parliamentary party, which will make the decision on the vote, is of the view that it fought the election as a government and it will support Mr Kenny’s nomination this week.

But that support will be a once-off and the party will then adopt its own position on each issue.

As contact intensifies in the run-up to Thursday, Mr Martin will meet the Independent alliance group in Dublin this morning, ahead of a parliamentary party meeting this afternoon at which its strategy for the first day of the new Dáil will be decided.

Mr Kenny and Mr Martin have both scheduled meetings with Independent, non-aligned and small parties this week.

No talks or contacts have taken place between any of the three bigger parties.

None of the parties expect them to take place until after the vote on Thursday.

As Mr Kenny is not expected to win a majority of the Dáil, he will remain on as Taoiseach in a caretaker capacity, representing the Government at the shamrock ceremony in the White House next week and presiding over the State’s formal commemorations of the 100th anniversary of the 1916 Rising.

Separately, Sinn Féin’s ard chomhairle will meet tonight to decide if the party will nominate Gerry Adams for the position of taoiseach.

The Right 2 Change group will also hold a press conference tomorrow outlining its position on government-formation.