Motions to be debated at party Ardfheis on potential post-election alliance, say sources 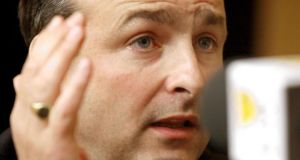 FF party leader Micheál Martin: New rules introduced by Fianna Fáil in 2013 compel its leader to convene a special ardfheis should he or she wish to enter a coalition. Photograph: Alan Betson

Fianna Fáil members are to vote at the party’s Ardfheis next weekend on whether it should rule out going into coalition with Fine Gael after the next general election.

A number of motions are set to go before the Ardfheis on the issue of possible post-election coalitions, party sources told The Irish Times.

They are likely to be bunched together for one single debate, with votes taken afterwards, at the conference in the RDS in Dublin.

While not binding on the leadership, party sources said the stance taken on the motions would indicate the thinking of rank-and-file members.

New rules introduced by Fianna Fáil in 2013 compel the party leader to convene a special ardfheis should he or she wish to enter a coalition, and the vote next weekend may provide an early indication of the attitude of members.

It is understood about four or five similarly themed motions have come in from a number of different party branches across the country.

The motions have been tabled by branches in the midlands, northwest and Dublin.

The rules passed in 2013 say that if the Fianna Fáil leader recommends the party enter into coalition, “a draft programme for government must be presented to voting members of the organisation for approval at a special ardfheis before any such government can be formed.

“The voting members will vote on a one member, one vote basis to accept or reject the draft programme. Only if a simple majority of those casting valid votes vote in favour of the draft programme for government shall it be approved. Only if such a majority is achieved shall Fianna Fáil enter the proposed government.”

These also call for a special ardfheis to announce the results of any leadership election. The Ardfheis opens next Friday night and continues on Saturday.