Fianna Fáil to question Taoiseach and AG on Fennelly report 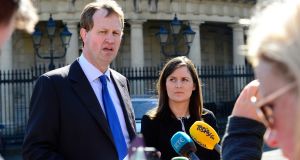 FF justice spokesman Jim O Callaghan said he would be seeking answers in Dáil about Taoiseach’s behaviour and that of AG. Photograph: Cyril Byrne

Fianna Fáil will seek to put pressure on the Taoiseach, Enda Kenny, and the Attorney General (AG) Máire Whelan this week over the Fennelly report.

The party’s justice spokesman Jim O’Callaghan said it was “ironic” that the Taoiseach and the AG remained in office while Martin Callinan and Alan Shatter had lost their jobs as Garda commissioner and minister for justice respectively.

He said that although the Fennelly report concluded that the recording of phone calls in Garda stations was illegal, the consequences of this unlawfulness were “significantly overestimated by the Attorney General and the government”.

Mr O’Callaghan said alarmist advice in 2014 from the AG, and the response to that advice by the government, had the effect of removing the former commissioner from his position, even though he had stopped the recordings when he became aware of them in 2013.

He said his party would be holding the Taoiseach to account in the Dáil and seeking answers about his behaviour and that of the Attorney General, and the interaction between them.

A spokesman for the Government said the fact that the report found that the recordings were unlawful and unconstitutional was a clear vindication of the AG’s advice in relation to the establishment of the Fennelly commission.

He said the fact that no criminal cases had been voided as a result of the recording was both fortunate and to be welcomed.

A debate on the report would be held in the Dáil and Mr O’Callaghan would be able to make his points in that forum, the spokesman said.

Sinn Féin spokesman on justice Jonathan O’Brien said that while the AG may have reacted with “undue concern” to the news of the recording of phone calls in Garda stations, he did not think there was any reason for her to resign.

“I don’t agree with Alan Shatter on that,” he said, referring to comments last week from the former justice minister who said Ms Whelan’s position was “untenable”.

Mr Shatter said that while he held the AG in great regard, he found her conduct “quite astonishing” in relation to the Garda recordings. The conduct had led to consequences that should never have occurred.

Mr O’Brien said it was obvious that Mr Shatter has a “couple of bees in his bonnet about how everything worked out”, but he did not think Ms Whelan could be held responsible for the Taoiseach’s actions, which in turn led to Mr Callinan and Mr Shatter losing their jobs.

Speaking to RTÉ radio on Sunday, Mr Shatter said the Fennelly report had disclosed yet again very senior management dysfunction across An Garda Síochána. It was a relief, he said, that the phone recordings had not impacted on the prosecution of cases, or “the jails opening, as was predicted by the Attorney General”.