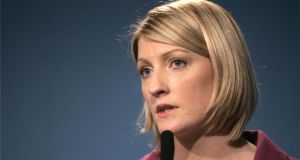 “I already do bootcamp twice a week,” says Senator Averil Power, “but I don’t think this is quite the same thing.” Photograph: Dara Mac Dónaill

Once upon a time just about the only qualification you needed to become an election candidate was a surname that approximated with the outgoing TD (if he was your father and you were his son, so much the better).

But now prospective candidates seemingly need to be as match-fit and have game plans as meticulous as that of the Irish rugby team. Especially if the candidate is a woman who hopes to stand for Fianna Fáil.

The party has announced that it has organised a “bootcamp” in early March for prospective female candidates.

“I already do bootcamp twice a week,” says Senator Averil Power, “but I don’t think this is quite the same thing.”

Indeed “bootcamp” may be a slightly overenthusiastic description of something that is slightly more mundane, yet no less important.

It is rather a workshop in Dublin which was a recommendation of the Markievicz commission, chaired by Prof Yvonne Galligan, which looked at how Fianna Fáil could improve gender balance, and encourage more female candidates.

The party has no women TDs at present and only two of its 14 Senators are female.

The seminar will be a series of workshops where candidates will learn about campaign organisation, finances, strategies and media relations.

“It’s designed so that women can compete with a view to winning seats.

The key thing from a Fianna Fáil perspective is that you need women with a realistic prospect of winning seat,” Ms Power said.

“Just adding on second or third candidates after strong males is not the way we should do it. We need strong women who have a good chance of winning seats.”

Lorraine Clifford, based in Dublin North, will also attend.

“It is a mentoring workshop helping people putting together their campaigns, and dealing with issue like how to raise finance,” she said.