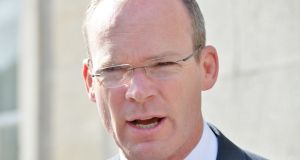 Minister Simon Coveney: said the €600,000 figure was included to ensure that first-time buyers in Dublin, where house prices are higher, can avail of the scheme. Photograph: Alan Betson / The Irish Times

A group of Dublin Fianna Fáil TDs have questioned the party’s push to have the cap for the Government’s “help to buy” scheme for first-time buyers reduced from a maximum home value of €600,000 to €400,000.

Mr Coveney and Minister for Finance Michael Noonan proposed an income tax rebate worth up to 5 per cent of the price of a home to a value of €400,000, allowing for a maximum rebate of €20,000.

Mr Cowen wants the cap kept at €400,000. Mr Coveney yesterday said the €600,000 figure was included to ensure that first-time buyers in Dublin, where house prices are higher, can avail of the scheme.

Mr Coveney is open to some changes to the house value cap and Mr Noonan was given Cabinet approval this week to make such changes if needed, although he will not give in entirely to Fianna Fáil.

Fianna Fáil sources say a compromise will be reached but still describe €400,000 as their preferred option. “€500,000 would be the maximum,” said one.

But a number of Dublin Fianna Fáil TDs, while critical of the construction of the scheme, said it made no sense for the cap to remain at €400,000. Dublin Bay South’s Jim O’Callaghan said that, due to price of homes in his constituency, “it is absolutely necessary to be available up to €600,000”.

John Lahart, a TD for Dublin South West, said Mr Coveney had not adequately explained that the benefit would be capped at €20,000, even if it would still apply on homes up to €600,000.

Dublin Fingal’s Darragh O’Brien said greater efforts should have been made to reduce the cost of building homes. Homes in his constituency were generally over €400,000, he said, but added that the idea that first time buyers would pay €600,000 was “fanciful”.

There are also differing views in the Independent Alliance, with Minister of State for Disability Issues Finian McGrath saying the cap should be maintained at €600,000 but Longford-Westmeath TD Kevin ‘Boxer’ Moran calling for it to be dropped to €450,000 outside urban areas.

Department of Housing sources said different caps for different areas of the country would be too difficult to implement.