Fianna Fáil TDs frustrated they cannot get anything done 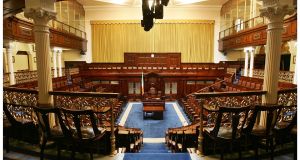 TDs seeing their proposals pass earlier stages in the Dáil at first believe they are making progress, only for their Bills to languish thereafter

If bond yields buttered no parsnips, as Pat Rabbitte once said, then parliamentary procedure is certainly not an issue on which to have an election.

The functioning of the Dáil is of little concern to the ordinary citizen, and the technicalities of the legislative process rarely trouble the national discourse. Policy measures and principles are, of course, of great interest – but the sausage-making is not.

Yet it is important to TDs, and in this Dáil Opposition TDs have more reason to be concerned about it than before.

The coming of the minority Government and Fianna Fáil’s role in facilitating it in office initially led to a belief that the days of majority administrations enforcing their will on the House were gone, ushered out by a new era of Bills attracting support across the floor of the Dáil and becoming law.

The reality, from the vantage point of some in Fianna Fáil, is somewhat different.

Given its extreme minority nature, the Government does not oppose many Opposition Bills in Dáil votes, and they can be allowed pass along early stages of the legislative process.

TDs seeing their proposals pass earlier stages in the Dáil at first believe they are making progress, only for their Bills to languish thereafter.

In the first weeks after the Government was formed, a Fianna Fáil Bill that would give the Central Bank powers to regulate mortgage interest rates passed what is known as the second stage of the legislative process in the Dáil and went to committee stage.

That stage sees close scrutiny of a Bill, section by section, and is mostly, as the name suggests, carried out by Oireachtas committees – although it can take place in the Dáil itself. The mortgage interest rates Bill is still at committee stage.

Another example was a proposal from Jim O’Callaghan, the Fianna Fáil justice spokesman, to establish a judicial appointments commission, which passed in the Dáil but was effectively killed off by the Government at committee stage.

Dáil rules stipulate that the Opposition is not allowed propose anything that would cost the exchequer money, and the Government used this procedure to stop O’Callaghan’s Bill.

Similar episodes are leading to a growing frustration among Fianna Fáil TDs that they cannot get anything done. Other party TDs, however, privately lay the blame on the Oireachtas committees for not working properly. Even so, they are already “itchy”, or were so before Christmas at any rate, and some questioned the point of keeping the Government in office, according to a party source

“It is all the unnecessary work,” said the source. “The mock Bill, going through the process knowing it is not going to go anywhere.”

The coming year will be a testing one, with the political set-piece, the budget, shaping up to be more contentious than the first introduced under the confidence and supply deal last October.

Fianna Fáil sources say the party will demand more information in the run-up to the budget, which is likely to lead to a kickback from the Government.

Also expect more Fianna Fáil TDs flying budget kites as summer approaches. Willie O’Dea’s early demand for an extra €5 for pensioners – which was included in the October spending package from Paschal Donohoe – was not lost on his party colleagues. The “Willie fiver” means frontbench Fianna Fáilers will try to emulate O’Dea’s success in notching up a political victory.

Then there is always the prospect of a change in leadership in Fine Gael.

In such a fraught political climate, the feelings of Fianna Fáil TDs on how the parliament operates matters.

And it is not just Fianna Fáil TDs who are frustrated. Ministers and Fine Gael TDs complain about the operation of the Dáil and Government, and senior officials believe nothing substantial can be done.

Of course, parliamentary procedure will not cause an election. The danger is, however, that both Government and Opposition TDs become so fed up with a system they believe is no longer working that they tip the Dáil towards dissolution.