Éamon Ó Cuív is elected on the 9th count at Galway west in the Bailey Allen Hall at NUI Galway. Video: Joe O'Shaughnessy 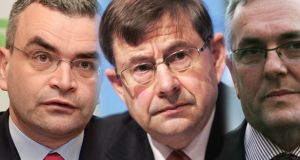 Éamon Ó Cuív (centre) said said Fianna Fáil’s first port of call would be people with whom they had ‘no philosophical differences,’ with.

Fianna Fáil’s former deputy leader Éamon Ó Cuív has said that his party cannot back away from pre-election pledges not to ally with Fine Gael in the latest sign of growing opposition within Fianna Fáil to talk of grand coalitions. Mr Ó Cuív joined a number of Fianna Fáil TDs who have spoken out both in favour, and against, a coalition with former Civil War enemy, Fine Gael.

Speaking after his election in the Galway West-South Mayo constituency , Mr Ó Cuív also said he would oppose an FF/FG coalition, because the party fought the election on the basis that it would not do that.

“I believe your word is your bond. . . people get cynical about politicians when they say one thing and do the opposite,” Mr Ó Cuív said, adding that Labour had suffered for breaking promises made before the 2011 election.

Asked how he would respond if party leader Micheál Martin proposed a deal with Fine Gael, Mr Ó Cuív said: “I’d say, let’s put it to an ardfheis, Micheál, and let’s listen to the members.”

Mr Ó Cuív said any of the party members he had been in contact with were saying such a deal would be “totally impossible”, but acknowledged that “maybe an ardfheis would vote differently”.

“It would have to go through an ardfheis, as in the end of the day we are elected representatives but the party belongs to the ordinary person who pays 20 euro a year like I do,”he said.

Predicting that a marriage with Fine Gael would not last, due to policy differences, he said that “the other possibility. . . is that we move to a more Continental way of doing business, where the Dáil is in control of the government, and the government is answerable to it, and that would be no bad thing”.

Galway city councillor John Connolly warned that there would have to be a “seismic shift” in Fine Gael’s approach for any such deal to work.

“My personal sense is that what gives politics a bad name is to say one thing prior to an election and then to do the opposite,” Cllr Connolly said.

“I’d be very reluctant to see us going in with Fine Gael. . . given the strong stance we took [during the election campaign], I don’t think I’d support it,”he said.

If there was an election later in the year, and Fianna Fáil put the concept to an ardfheis beforehand, that would be “more plausible”, he said.

“But if we were to go in with Fine Gael, there’d have to be a seismic shift in how they treat the most hard-up cases in society,” Cllr Connolly said. “Fine Gael is more obsessed with cutting taxes for the wealthy than putting money into public services.”

I think we need to prioritise health and housing and if we go into government we won’t be bending on those issues.”

Dara Calleary, who was re-elected for FF in Mayo on Sunday afternoon, said FF should coalition options with others, notably Labour, the Social Democrats and independents.

“We are staying out of government with Fine Gael,” he said. “Can we work with other parties who want a change of government? We’ll have to see. We have to talk to others.”

Coalition with Sinn Féin was also out, he said. On Labour, “they are into fairness as well. Social Democrats? Absolutely, there’s no doubt about that.”

He said coalition talks, which he said could take some time, should aim to reach “a collective agreement about a different way of government and politics in a way that respects the institutions of State”.

Carlow–Kilkenny Fianna Fáil TD John McGuinness said the country needed a Government with a plan for the next the three to five years and another election in the short term would be a failure of the political system.

Asked if he had a difficulty with the idea of going into government with Fine Gael, he said there was a responsibility on politicians to form a government and a responsibility within Fianna Fáil to make sure that that government reflects its policies. “The question is whether Fine Gael will do a deal with us?”

If Fianna Fáil cannot get its policies implemented by Government, then it must become the best opposition that it can be.

Offaly/North Tipperary TD Barry Cowen did not rule out the possibility of a hung Dáil.

“I don’t know, it appears to be possible alright,” he said. “First of all we will meet as a parliamentary party. On the difference between Fine Gael and Fianna Fáil, he said, “we are so incompatible, there is a long way to make us compatible, we have a long road to travel.”

Limerick county Fianna Fáil TD Niall Collins was adamant the party should not do business with Fine Gael or Sinn Féin “I can’t see it happening,” he said. “What this country wants is a change of emphasis from government. I can tell you on March 10th Micheál Martin will be the nominee for Taoiseach.”

“We have said and I have said personally under no circumstances are are going in to prop up a Fine Gael proposition.... We have worked long and hard to rebuild our credibility as a political party and I think all that would just go for nought if we were to turn around and step into coalition with Fine Gael.”