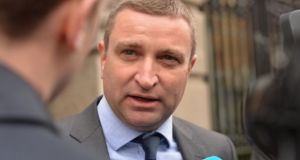 Deputy Niall Collins has said the past few weeks had been a difficult period for Fianna Fail. File photograph: Alan Betson

Fianna Fail TD Niall Collins has supported calls for a whip to be imposed on his party to ensure they support legislation to implement the decision of the people on the Eighth Amendment.

Speaking on The Irish Times Inside Politics podcast, Mr Collins said he was “really concerned” that any TD or Senator would consider voting against any aspect of the legislation to regulate the termination of pregnancy at any stage.

Fianna Fail leader Micheál Martin told the parliamentary party on Tuesday night he expected TDs and Senators to support the legislation when it comes to the House.

Inside Politics Podcast with Niall Collins

That was broadly accepted by the members present. However, Fianna Fail TD Barry Cowen outlined his belief that the whip should be applied.

The meeting ended abruptly as Donegal TD Charlie McConalogue urged members to air their views with Mr Martin at their private meeting.

Speaking on Wednesday morning to The Irish Times, Mr Collins said the past few weeks had been a difficult period for Fianna Fail.

There was an element of members trying to make political calculations rather than dealing with the issue of the substance of the matter, the party TD said.

“What my colleagues, or at least some of them, are going to have to appreciate is that one definition of democracy is that the minority has to accept the decision or the will of the majority. That has been emphatically expressed by the result of the referendum result.”

Sligo-Leitrim TD Marc MacSharry, who did not support repeal, has confirmed he will unequivocally support the legislation.

Mr MacSharry said he made that position known at the Fianna Fail parliamentary party meeting on Tuesday evening.

He added: “I have no difficulty, while a no voter, in separating my personal view and my legislative obligations and responsibilities and would therefore be supporting legislation when it comes and happy to feed any thoughts or ideas/ suggested amendments into our health spokesman as is the practice with all legislation.”

The legislation to give effect to the decision of the people is due to be published within a matter of weeks. Minister for Health Simon Harris will meet Attorney General Séamus Woulfe to identify what improvements need to made to the general scheme of the Bill that was published in March.

Mr Harris will also meet members of the Opposition today to seek their support in fast-tracking the legislation to regulate the termination of pregnancy. The Government expects it will be 2019 before abortion services can be provided in this country.

It is understood there is a willingness to examine whether the Information Act can be repealed to allow for doctors in Ireland to refer women to abortion clinics abroad and to consult with doctors in other jurisdictions about their medical status.