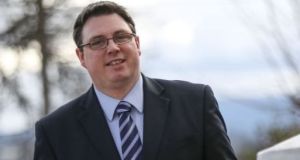 Finglas native Cllr Paul McAuliffe, a 10-year veteran of the council, is in line to run for the Dáil in the next general election.

Fianna Fáil councillor Paul McAuliffe, is set to be elected the 350th Lord Mayor of Dublin on Friday in a voting pact with the Green party and Labour and the Social Democrats.

On Thursday evening, Fianna Fáil was also seeking to secure positions of power across the three other Dublin local authorities.

Any party can put forward a mayor for election, with the candidate who gets the most votes from their fellow councillors securing the chain of office for the next year.

However, to maintain a voting pact on Dublin City Council for the next five years, the support of 32 of the 63 councillors is needed. With Fianna Fáil on 11 seats, the Greens on 10 and Labour holding eight seats, the support of five others was needed. On Thursday, the Social Democrats, who hold five seats, looked the most likely to make up the numbers required for a stable voting arrangement for the forthcoming council term.

With no party strides ahead of another, it took longer than usual to determine what combination of parties and Independents would effectively “rule” the council, through what is known as the “mayors and chairs” deal.

The pact also sees the parties take up the more prominent chairing roles on the council, with the chair of the housing strategic policy committee generally the most sought after because of its high profile nature. However, councillors from parties not involved in the pact will also get to chair some committees during the five-year term.

The arrangement is also based on policy agreements between the parties. A draft document shows a focus on climate change actions, including carbon, litter and pollution reductions. Transport and public realm issues, including pedestrian and cycling initiatives, such as the long awaited College Green plaza project, and the pedestrianisation of a number of city streets, are also set out. There are also measures aimed at increasing public housing provision and providing public toilets.

Fianna Fáil has not had a Lord mayor in over a decade since Eibhlin Byrne in 2008, and before that its last was Royston Brady in 2003.

Finglas native McAuliffe, a 10-year veteran of the council, is in line to run for the Dáil in the next general election, where the party hopes he will unseat Fine Gael TD Noel Rock, who he lost out to for the final seat in Dublin North West in 2016.

Negotiations are continuing across the other Dublin councils ahead of their meetings on Friday, but coalitions on the councils are emerging.

In Dún Laoghaire-Rathdown County Council, Fine Gael, despite being the largest party on the authority with 13 out of the 40 seats, is set to be excluded from its majority coalition for the first time in 25 years.

Fianna Fáil’s Shay Brennan is lined up to be mayor, with the majority coalition comprising Fianna Fáil, the Greens, Independents and the Social Democrats.

Fianna Fáil councillor Eoghan O’Brien is also in line to be mayor in Fingal, with the arrangement set to be a combination of the Fianna Fáil, the Green Party, Labour and Independents.

On South Dublin County Council, Fine Gael is likely to have Vicki Casserly as the first mayor of the council’s term, with Fianna Fáil’s Trevor Gilligan her deputy in a majority grouping combined of Fine Gael, Fianna Fáil, the Green Party and Independents.