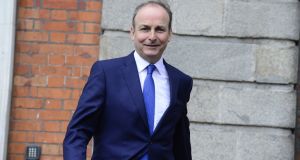 Micheál Martin would be not drawn on where talks with the SDLP would lead in terms of a merge of the two parties.Photograph: Cyril Byrne

The Fianna Fail leader has said the party has begun talks with the SDLP to develop a new political agenda in the North, which has been so long without an executive in the face of Brexit.

Micheál Martin would be not drawn on where talks with the SDLP would lead in terms of a merge of the two parties. However he said Fianna Fail had a long standing relationship with SDLP and they were looking at “an intensification of that relationship in the period ahead”.

Mr Martin said both Fianna Fail and the SDLP had shared concerns over the growing lack of public faith in the political institutions in Northern Ireland.

“There is a need for a new political agenda in the North that’s not just constitutionally obsessed, there is a large middle ground in the North who want bread and butter issues of the day dealt with competently and by a government,” he said.

Mr Martin said that there was “a large section of middle ground” in Northern Ireland which wants politics and the institutions such as the Executive and the Assembly to work along with full implementation of the Belfast Agreement .

“It’s a scandal that the Assembly and the Executive are not in situ given the enormous threat that Brexit represents. I think it’s incredible and incomprehensible that Sinn Féin and the DUP would let this to happen- it should never have been collapsed in the first place and I said that at the time.

”Given the enormous implications that Brexit has for the island of Ireland and in particular Northern Ireland’s economy, the Executive’s collapse really undermines people’s faith in politics and the institutions,” he said. “Something new is needed and that is something we will work on with the SDLP,” he added.

Mr Martin warned that “cross-border institutions are withering on the vine”. There was very poor morale among those involved in these institutions as “the momentum has been sapped out of them“ by the failure to fully implement the Belfast Agreement.

Asked about unionist fears a possible merger of the SDLP and Fianna Fail would destabilise the North, Mr Martin acknowledged that was something that he was conscious of and he offered some reassurances.

“The first part of this is really about the politics of it in the sense that this isn’t just about political parties, it’s about a real genuine effort to get the focus on the full implementation of the Good Friday Agreement and to get politics working for people in practical ways.

“That’s because there are a quite significant number of people who are not obsessed with identity politics in the North and who want a different approach and so, when we talk about the need for a new political agenda, we are not saying it just has to be in narrow prism of nationalist/ republican idea but rather in addition to that it reaches out to a broad range of people to get the North working.”