Opinion: Women on a ballot paper are nearly always exceptional – for even getting there 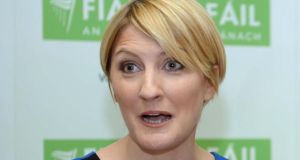 ‘Out of Fianna Fáil’s 14 Senators, “up to one-third” are women. Well, two: Averil Power (above) and Mary White.’ Photograph: Eric Luke

Last July, Fianna Fáil announced its five-year Gender Equality Action Plan (GEAP). I don’t know why its plans always have to be five years long. I’ll take it as a given that Fianna Fáil isn’t basing this time period on the theory of productive forces in Marxism, but you never know. After all, it’s a socialist party, lest we forget. Or at least one that appreciates socialising. Preferably in tents surrounded by horses.

Recently, I had a very pleasant conversation on Newstalk with Mary O’Rourke about feminism. When it came to women in politics, O’Rourke said she didn’t agree with gender quotas. She is entitled to that opinion, but a gender quota is the very thing Fianna Fáil’s GEAP is trying to achieve: having women make up at least 33% of the party local election candidates.

The plan was the result of the Taskforce on Female Participation in Fianna Fáil, chaired by Senator Averil Power, who is the most intriguing thing to come out of the party since SSIAs. But Fianna Fáil is a lonely, lonely place for women.

There was more likelihood of the missing Malaysia Airlines aircraft turning up at the Fianna Fáil ardfheis in Killarney at the weekend than the party actually keeping the gender commitment it made last year. However, the party’s failure to even come close to its promise is a colossal embarrassment. And it probably indicates that Fianna Fáil’s so-called renewal will be closer to more of the same than any actual reform. Its aspirations are for the birds – but only the feathered kind.

When political parties do actually make a concerted effort to rustle up some women, give them support and encouragement, lo and behold, it works. Labour Women have nearly managed to hit their 30 per cent target two years ahead of schedule. 29.7 per cent of candidates in the locals will be women. That didn’t just happen. They worked at it.

I was speaking to a person involved in gender equality in politics a while ago, who said that no sooner do you suggest to a man that he should run than his face is staring down at you from a poster on a lamppost.

He practically has the rosette made before the conversation is over. But women need to be almost coerced into running. It is this confidence-building, encouragement, solidarity and support that is key to sustaining women’s involvement in politics while gender quotas light the fuse.

Meanwhile, over in the feminist bastion of Fine Gael, the party spent a whopping €417 on its women’s programme in 2012 and €164 in 2011. If that’s not commitment to equality in the Oireachtas, then I don’t know what is.

When queried about this in this newspaper, Enda Kenny said, “I don’t particularly like gender quotas, but I do like to see more and more women involved in politics.” Sound the paradox klaxon.

Women should be absolutely raging about this. No wonder our interests aren’t prioritised at a legislative level when our political power is so diluted by middle-aged, middle-class, mediocre, male “leadership”.

Parallel universe
Those who oppose gender quotas exist in a parallel universe where the best person should always get the job, yada yada yada. It’s a universe that assumes “all things being equal”. But they’re not.

Come the local and European elections, we’ll have the option to vote for a vast array of men on any ballot paper around the country, from eejits to Machiavellian operators, to hereditary politicians (possibly an Irish genome malfunction), to good guys and smart fellas to nincompoops.

But the women on a ballot paper are nearly always exceptional. They’re exceptional for even getting there. Give us the right to vote for the same breadth of women as we can for men, and then let the best person get the job. No “less than”, no “up to”, just the best.

North gets additional £912m from British government to tackle Covid-19