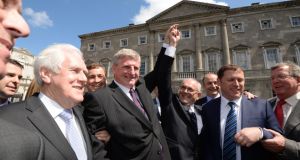 Bobby Aylward (centre) has his hand raised by Carlow-Kilkenny Fianna Fáil colleague John McGuinness on his arrival at Leinster House after winning a byelection in the constituency at the weekend. Photograph: Dara Mac Donaill/The Irish Times.

Fianna Fáil put on a united front as it welcomed Carlow-Kilkenny byelection winner Bobby Aylward back to Leinster House.

Mr Aylward (60) arrived to take his seat on Tuesday afternoon and was welcomed by every member of the parliamentary party.

Fianna Fáil leader Micheal Martin said it was “Bobby’s day” and denied the occasion had been overshadowed by the acrimony surrounding the departure of Senator Averil Power from the party.

Mr Martin told reporters he had articulated his views on the resignation and did not intend to add to them any further.

“Things happen in politics and we move on,” he said. “We dealt with those issues yesterday.”

The party leader said the people had spoken in the Carlow-Kilkenny constituency and had given him emphatic support.

He sat between Mr Ó Fearghail and fellow Fianna Fail Carlow-Kilkenny TD John McGuinness. Welcoming Mr Aylward, Mr Martin praised him for his loyalty. There was laughter when the Fianna Fail leader thanked Mr McGuinness for working on the newly-elected TD’s behalf.

“You win some and you lose some,’’ said the Taoiseach when he welcomed Mr Aylward, in a reference to Senator Averil Power’s exit from Fianna Fail on Monday.

Mr Aylward said he hoped to articulate the wishes of his constituents and fight their corner for the remaining Dail term.

Mr Aylward won the Dáil seat vacated by former minister for the environment Phil Hogan on his appointment to the European Commission. He was previously a TD for the constituency from 2007 to 2011.

Mr Aylward was declared the winner at the conclusion of the ninth count at 2.10am on Sunday. He had almost 5,000 votes to spare over his closest rival Fine Gael’s David Fitzgerald. Mr Aylward amassed 18,572 votes in the first count, or 28 per cent of the valid poll.

Fianna Fáil’s John McGuinness, Fine Gael’s Pat Deering and John Paul Phelan and Labour’s Ann Phelan are the other TDs in the constituency.

It was the seventh byelection to have been held since the general election in 2011 and Fianna Fáil’s first win any of them.