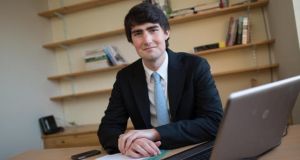 Fianna Fáil councillor Jack Chambers has argued that the application by nine delegates to move back into Dublin West comes “at the eleventh hour” and goes against the party’s principles of one-member one-vote. Photograph: Conor McCabe Photograpy

An internal row has blown up between the two leading contenders to be the Fianna Fáil candidate in Dublin West for the general election.

Ahead of the selection convention in Tyrellstown on Wednesday night, Castleknock-based Cllr Jack Chambers has lodged a written complaint to party headquarters over the alleged transfer of delegates from the neighbouring constituency of Dublin Fingal.

The nine members were transferred by the party’s membership committee after representations were made by Mr Chambers’s rival, Cllr David McGuinness.

There have been a number of constituency changes in recent years with portions of Dublin West moving to Dublin North, or Dublin Fingal as it is now known. However, in the most recent change, Hollystown, in the Ward area of Mulhuddart, moved back to Dublin West. All nine members are believed to reside in Hollystown.

The basis of Mr Chambers’s complaint is that the nine members were entitled to vote in the convention for Dublin Fingal held recently (even though the selection convention there saw the uncontested nomination of Senator Darragh O’Brien).

Mr Chambers has argued that the application by the members to move back into Dublin West comes “at the eleventh hour” and goes against the party’s principles of one-member one-vote and also against natural justice.

In his letter to party general secretary Sean Dorgan, Mr Chambers has demanded the decision be rescinded and said he will seek legal advice otherwise. A spokesman for Fianna Fáil said that correspondence had been received and would be looked into. The fact there was no vote at the Dublin Fingal convention may have a bearing on the eventual decision arrived at by the party.

The battle between Mr Chambers and Mr McGuinness is set to be close. With about 150 members entitled to vote, the votes of the nine members returning to the constituency could be crucial.

There was speculation that the party’s European election candidate Mary Fitzpatrick might seek a nomination in Dublin West after her electoral base on the Navan Road was transferred into the constituency. It is understood she has decided to remain in Dublin Central.

Mr McGuinness said yesterday that the nine members concerned live and vote in Dublin West and have registered in the constituency. He said when the last constituency changes were made, the members had made efforts to get back to Dublin West but like a lot of things this matter had “only got sorted when it had to be sorted”.