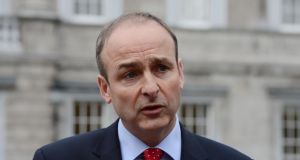 Fianna Fáil must carve out a distinctive identity and give people a reason to vote for the party or it risks becoming the “next SDLP”, a byelection postmortem meeting of the parliamentary party heard yesterday.

Micheál Martin chaired the meeting of TDs and Senators, which saw a lengthy discussion on the fallout from the Roscommon-South Leitrim and Dublin South West byelections last week.

Fianna Fáil had been expected to win in Roscommon-South Leitrim but lost to Independent Michael Fitzmaurice. Its candidate in Dublin South West, John Lahart, came fifth on first- preference votes in an election won by Anti-Austerity Alliance candidate Paul Murphy.

As Mr Fitzmaurice and Mr Murphy took their seats in the Dáil, the Fianna Fáil parliamentary party spoke of the need to define a distinctive position in the political landscape or risk becoming irrelevant.

It is understood no speaker laid the blame at the door of Mr Martin’s leadership, with Galway West TD Éamon Ó Cuív saying the party’s problems were a “far bigger” issue than just the leadership alone.

Mayo TD Dara Calleary, who was director of elections for the Roscommon South-Leitrim byelection, said a more sceptical approach to Europe and policies and regulations from the European Union should be adopted.

He said people were feeling disenfranchised from politics and the issues were the same “in Ballaghaderreen or Ballymount”. He cited turf-cutting and water charges as two issues that featured strongly in the byelection and claimed they were ideas initiated in Europe.

Longford-Westmeath TD Robert Troy said the party needed to do more to connect with younger voters in particular. He chastised his colleagues at the meeting for being too relaxed, adding: “We’ll be the next SDLP.”

Mr Ó Cuív said Fianna Fáil used to be supported and trusted by the public but was “now irrelevant to people’s lives”.