Party has struggled in recent polls as deep divisions emerge, particularly over Eighth 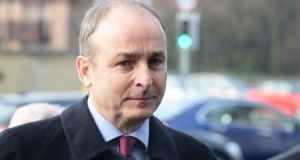 Fianna Fáil Micheál Martin has been calling in his party TDs since early Thursday morning updating them on the changes. Photograph: Cyril Byrne

Mr Martin met with individual TDs on Thursday morning to inform the changes.

Mr Calleary, who will now become the director of policy development, said he was honoured to be promoted to the role.

Barry Cowen has been promoted to spokesman on Public Expenditure and Reform, while Darragh O’Brien will replace him as spokesman on Housing.

Billy Kelleher is moved from health to spokesman on jobs. Stephen Donnelly will be moved to the spokesman on Health, while Lisa Chambers has been appointed spokeswoman on Brexit.

Mr Martin said: “Fianna Fáil’s core aim in this Dáil is to make full use of the democratic mandate we have, to hold the Government to account and ensure that fairness is at the centre of the decision making process.

“Through the Confidence and Supply Agreement we have secured a focus on investment in public services and we continue to drive forward the argument for action on the country’s housing and health crises. We will also continue to develop new policies and strategies to deal with the country’s problems, refreshing and renewing our plan to ensure an Ireland for all.”

Mr Martin had been calling in his party TDs since early Thursday morning updating them on the changes.

The party has suffered in recent polls as Taoiseach Leo Varadkar drives support for Fine Gael.

There have been deep divisions emerging in the party, in particular over the referendum on the Eighth Amendment.

Many of the TDs have been in their positions for over seven years, while others were moved to different roles in 2016.

- Dara Calleary TD has been appointed Deputy Leader and Director of Policy Development.

- Barry Cowen TD has been appointed spokesman on Public Expenditure and Reform.

- Darragh O’Brien TD has been appointed spokesman on Housing, Planning and Local Government.

- Niall Collins TD has been appointed spokesman on Foreign Affairs and Trade.

- Billy Kelleher TD has been appointed spokesman on Jobs, Enterprise and Innovation.

- Stephen Donnelly TD has been appointed spokesman on Health.

- Lisa Chambers TD has been appointed spokeswoman on Brexit.

- Jack Chambers TD will join the front bench in the role of spokesman on Defence.