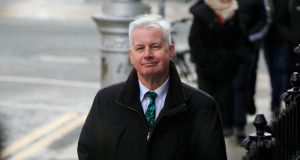 “We cannot say it publicly at this time but the only game in town for us is Fianna Fáil. ”

This private assessment by a Sinn Féin TD reflects the realpolitik of the party’s approach to forming a government, although in fairness the gap between that and its rhetoric is narrower than you would expect in such situations.

“We’re able to add, and we’re able to subtract, so I think we have recognised that the mathematics are tricky,” she said.

That seemed to nuance comments made by Sinn Féin housing spokesman Eoin Ó Broin, who told RTÉ’s Morning Ireland on Friday that a Sinn Féin government without support from Fine Gael or Fianna Fáil was not doable.

Did it also signal a change of mind over the weekend, with Sinn Féin perhaps being mindful of the criticism from People Before Profit that it “threw in the towel” on a left-wing government before negotiations even began?

A number of experienced Sinn Féin TDs spoke to The Irish Times about the prevailing mood in the party. They downplayed any difference. It was pointed out that a minority Sinn Féin-led government would still need acquiescence from one of the other big parties.

“Could we do it without them?” asks one TD. “Some say it would leave us a hostage to fortune. One of the big parties could pull the plug and then you would have a powerless government.

“On the other hand, others say go in there for a while and try to implement your key and core policies.

“If they bring it down you can go to the public, or you go yourself after achieving a certain amount. It’s a strategy that might lead to an increased mandate.”

But there’s little enthusiasm for a go-it-alone approach among TDs. The prevailing view is that Fianna Fáil involvement is needed, but it needs to be “balanced” by the involvement of others, namely the Greens and/or the Social Democrats.

Dublin South-West TD Seán Crowe says the idea of going into government with Fianna Fáil will be a bitter pill to swallow for the party’s grassroots.

“The selling point though is if you can agree a programme of government that brings about change, and tackles the big issues, then it is possible.

“We have no sense from [Fianna Fáil leader] Micheál Martin or his frontbench they have cottoned onto that. A radical approach and a big change of mindset will be needed [from them].”

Crowe believes there is a lot of posturing right now and real negotiations will begin after Thursday, when the 33rd Dáil sits for the first time. “Everybody will change their tune after that,” he says.

Waterford TD David Cullinane says the party’s members are “not giving up on the prospect of a Sinn Féin-led government of the left” but he accepts the arithmetic makes it difficult.

At this moment in time, Sinn Féin does not seem keen on the idea of a minority government led by it. The establishment of such an administration would be approved by the Dáil because either Fine Gael or Fianna Fáil has abstained on a once-off basis.

Thereafter it would have to exist on its wits and a continuous series of short-term deals, while facing the threat of an election. (“We are not afraid of an election,” says Crowe. “The tide will not have gone out for us, the opposite in fact.”)

Such an arrangement could work but it does not lend itself to stability. However, it does not seem to be in the Sinn Féin playbook at present. The only way to make it sustainable would be through a confidence-and-supply deal. And the chances of that happening are zero.

Is Sinn Féin serious about government? The evidence points that way. And if it yearns for stability, the only realistic achievable endgame is a deal with Fianna Fáil.