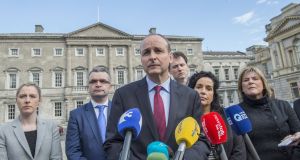 Senior party figures said Michéal Martin would not agree to a partnership arrangement with Fine Gael and Independents – described as “coalition by the back door”. Photograph: Brenda Fitzsimons/The Irish Times

Fianna Fáil is a party of “realists” and leader Michéal Martin will support a Fine Gael-led minority government if Enda Kenny secures the support of Independent TDs, senior party sources have said.

It was also said the party did not want to add “fuel to the fire” of increasing political tensions by responding to Mr Kenny’s repeated call for a full partnership government.

Senior party figures, however, repeated the position that Mr Martin would not agree to a partnership arrangement with Fine Gael and Independents – which was described as “coalition by the back door”.

It was stressed that a way out of the current impasse would be found only if all sides sat down to talk to each other and did not conduct negotiations via public statements.

A senior Fianna Fáil source last night called for calm on all sides and said negotiations must not be carried out through “five-minute media hits”. “It is about the serious business of government formation and not soundbites,” the source said. “We are prepared to meet with Fine Gael and Independents to discuss a minority government.”

Fine Gael wants Fianna Fáil to outline on what conditions it would support a Fine Gael-led minority government, such as committing to supporting budgets and confidence votes. A Fianna Fáil source said: “If there was real partnership both parties should be able to talk about conditional support. And if there was real reform, the same.”

The source said neither Fine Gael, Fianna Fáil nor Independents want another election and pointed to Mr Martin’s speech in the Dáil this week, which outlined his position and that of Fianna Fáil.

In that speech, Mr Martin said: “The negotiations have been constructive but not conclusive so far. However I believe that we are close to a position where Deputies will be in a position to state what government option they will assist and support. The primary focus is on the option of what would be a minority government.”

Party sources also said Independent TDs who have been engaging in talks with both Fianna Fáil and Fine Gael must make up their minds and decide which party they will support in a minority situation.

There were also some internal tensions in Fianna Fáil yesterday over a statement made by finance spokesman Michael McGrath, who said further talks should take place between all parties.

It is understood Mr McGrath’s interview with RTÉ News took many in Fianna Fáil unawares with some privately accusing him of having his own agenda.

There is an uneasy relationship between Mr McGrath and Mr Martin, who are constituency colleagues in Cork South Central. Mr McGrath is also head of Fianna Fáil’s negotiating team.

Fine Gael figures said his statement encouraged some in their party that Fianna Fáil may be open to a coalition deal.

1 Coronavirus: Non-essential travel from US set to be banned within days
2 Covid-19 incidence in the Republic set to surpass that of UK
3 ‘Our hearts are broken’ – implications of fresh lockdown sink in
4 The MacCarthy family: Their father survived Dunkirk, Nagasaki and a torpedoed ship. Will their pub survive Covid-19?
5 Ecuador navy tracks huge Chinese fishing fleet near Galapagos
Real news has value SUBSCRIBE