Fianna Fail’s 76th Ard Fheis is taking place in Dublin. Over 3,000 delegates are attending the event being held in the RDS. The theme for this year’s annual gathering of the party faithful is “An Ireland For All”. Video: Bryan O'Brien 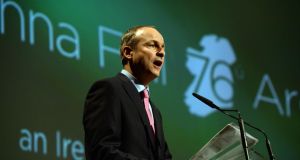 Fianna Fáil is ready to go back into Government, the party leader told its ardfheis in Dublin tonight.

Micheál Martin told delegates the party was prepared to lead again - four years after it faced wipeout in the 2011 general election.

“Four years ago most commentators predicted we were finished - something they often forget,” he told his audience at the RDS in Dublin.

“But we are again the largest party in local government and whenever Enda Kenny finally decides to go the country, we will be ready for him.

“In only a handful of years we’ve implemented within the party our biggest reform since we were founded.

“Already there has been a huge amount of work done preparing for the next election.”

Mr Martin said his message to members this weekend is to get on the ground and get focused. He denied the party was becoming irrelevant amid speculation over another bad poll for them this weekend.

“What we are getting from the membership to the parliamentary party is ‘it is a short run to the general election, focus, coherence, unity of purpose, energy and let’s go win the seats’.”

In his opening address, Mr Martin said the party would take the fight to the doorsteps of every community.

He said people wanted a Government that provided a real alternative to the spin, broken promises and growing inequality of Fine Gael and Labour.

“For over a year Fine Gael and Labour have been going into overdrive in their efforts to buy their way out of unpopularity. By the time it’s over this will be the longest election campaign by any government in our history.

“They’ve even invented a ‘Spring Financial Statement’ which will allow them over the next few days to announce all sorts of giveaways without actually having to cost or implement them.

“They’re going to keep this up and between now and the election every morning we’ll read another promise - another so-called media exclusive from a minister’s wish list.

“Let them keep going on this, because the more they do it the more people can see through the myth of their claim to have turned around the public finances.

“They voted and campaigned against all of the key measures which stabilised the budget - and in government it took them over three years before they produced even the most basic plan of their own.”

Over 3,000 delegates are expected to the RDS for the two-day ardfheis where the party will release new policy documents on Housing.

It will also vote on future coalition governments, change the way it elects its leader and vote on its new vice president.

Former councillor Mary Fitzpatrick launched a heated attack on the party after reports of councillor Mary Hanafin alleging it stands for nothing. Ms Fitzpatrick, who intends on contesting the next general election for Fianna Fáil, said the party has missed opportunities and its recovery is becoming more elusive.

Outling the party’s childcare proposals, Senator Power said the real test for Fianna Fáil would be the next general election.

“Of course getting towards an election people get nervous about their own prospect and the party’s prospects,” she said.

“The best way to respond to that is to get out and do work on the ground and on national level to be delivering policies like this.

“When I am knocking on doors, people ask me more about childcare than internal Fianna Fáil politics.”

The party’s spokesman on children Robert Troy said some members of the party are promoting internal wrangling to get media coverage.

“The best way to get media coverage these days is to kick your own party,” he claimed.

“There is a lot of media interested and fascinated with one of your own kicking ourselves but at the end of the day what people really want to see who is going to make this a better place to live in.”