Party commits to reducing USC and raising threshold for high rate of tax in €1.3bn package 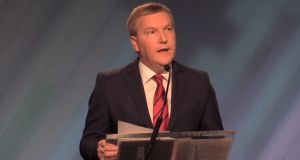 Fianna Fáil has pledged to postpone the rise in the pension age to 67 planned for next year and to pay sums equivalent to the old age pension to those over 66 in the meantime.

The promise to continue paying sums equivalent to the pension matches the pledge made by Minister for Social Protection Regina Doherty late on Tuesday night when she said that Fine Gael would pay a “transition payment” to those retiring at 66 until they reach the new pension age of 67.

Other parties have promised to restore the pension age back to 65.

The Fianna Fáil finance spokesman Michael McGrath was launching the party’s personal tax proposals in Dublin on Wednesday , where he promised reductions in the universal social charge, increases in the threshold for the higher rate of income tax, an increase in the home carer’s tax credit, a €600 rental tax credit and other benefits.

The party said that its tax cuts package would cost €1.3 billion over the lifetime of the next government, and repeated that it would prioritise investment in public services over tax cuts.

It accused Fine Gael of promising to abolish the USC but not delivering this during the last Government but Mr McGrath and party colleague Barry Cowen denied that Fianna Fáil had blocked the abolition of the USC under the confidence-and-supply agreement.

Fianna Fáil insisted that it would only reduce taxes in a “responsible manner and within the budgetary projections published by the Department of Finance”.

“We’re not getting involved in an auction with Fine Gael on income tax,” Mr McGrath said.

Mr McGrath said the pension issue was “a very significant issue on the doorsteps . . . we have to listen to the electorate, we live in a democratic society”.

Asked if the review of pensions proposed by Fianna Fáil was effectively a kick to touch, Mr McGrath said: “We shouldn’t be making this up on the hoof.”