Analysis: ‘This is a slow bicycle race towards a [leadership] contest likely in 2022’ 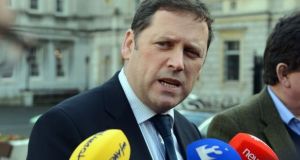 Barry Cowen intimated that he did not feel he got due process from Micheál Martin when it came to his own recent controversy.

Leaking from private parliamentary meetings has become a time-honoured tradition of the Fianna Fáil and Fine Gael parties.

In a normal political year, with a more traditional form of coalition Government, the subject matter of such meetings ranges from vaguely interesting chatter to the occasionally significant spat.

But this is not your average political year and the coalition arrangement is a historic experiment between two civil war rivals and a small party that has its doubts.

The weekly Fianna Fáil parliamentary party meeting, supposedly a private venue for members to discuss internal matters, might as well be held on the plinth of Leinster House such is the level of detail in almost live leaks to journalists.

Party insiders say they believe the forum is being increasingly used by TDs and senators to air their frustration with the leadership of Micheál Martin, in a semi-public way.

This was evident on Wednesday night when Marc MacSharry took aim at Mr Martin over his handling of the Leo Varadkar GP pay deal leak controversy.

The Sligo TD spoke of how he believed the party leaders had concocted a plan to “protect the sacred cow - Leo”.

When the Taoiseach noted the tone of the criticism was very personal, Mr MacSharry retorted that if he could not take the criticism, he “should not be leading the party” before also blaming Martin for Fianna Fáil’s dismal performance in the polls.

One onlooker said while people had expected such a riposte from MacSharry a more ominous danger for Mr Martin was contained in comments from Offaly TD Barry Cowen.

He intimated that he did not feel he got due process from Micheál Martin when it came to his own recent controversy.

The newly appointed minister for agriculture was forced to resign when it emerged he had served a three-month disqualification from driving after he was found to be driving under the influence of alcohol in September 2016.

“Marc was Marc. He is the Donald Trump of the party, said one Fianna Fáil source who took part in the meeting.

“But the voices of reason are the likes of Barry Cowen and Jim O’Callaghan. Jim is probably the Joe Biden of the party. There is a frustration generally that Micheál is allowing Leo to steal the limelight.

“If you were to ask what the mood is, it was captured best by Jim O’Callaghan on radio when he said the Tánaiste should have apologised and said what he did was wrong.

“If you compare how quickly and how hard people came down on Dara Calleary and Barry Cowen, there was a feeling that Leo has been let away with this.”

Some of the newer Fianna Fáil recruits speculate about Norma Foley and Jack Chambers as two people who may in future fancy themselves as leadership material but veteran members believe Jim O’Callaghan is clearly positioning himself for the job.

Mr O’Callaghan has in recent weeks taken a subtly different stance to Micheál Martin on some big-ticket items.

Speaking after a Dáil session in which the Tánaiste fielded opposition questions about the leak, Mr O’Callaghan told this newspaper Varadkar needed to “acknowledge that sending a confidential Government document to an unauthorised person was wrong.”

He stopped short, however, of formally requesting a further statement from the Fine Gael leader. All of this was despite the fact that Mr Martin was giving his backing to his coalition partner.

During the debate that preceded a move to Level 5 Covid 19 restrictions, it was O’Callaghan who issued warnings about the dangers of a “political system that blindly follows everything Nphet says.”

Despite the increasing direct and indirect attacks on Martin’s leadership, those present at this week’s party meeting did not detect any desire for a heave any time soon. “This is a slow bicycle race towards a contest likely in 2022. Micheál is going to be there for two years.

“There is no move to try and replace him right now. But the issues remain, especially around our communications.”

The message quite clearly is that Fianna Fáil members will hold their fire for the time being but the well of support for the leader is depleting and in dire need of attention.