Fianna Fáil orders two women to be selected without contest 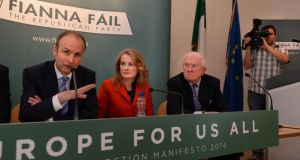 Fianna Fáil leader Micheál Martin with Mary Fitzpatrick, who won automatic selection last week to be the sole candidate in her Dublin constituency, and Pat ‘The Cope’ Gallagher. Photograph: The Irish Times

Fianna Fáil’s strict application of its gender quota rules has resulted in another two women gaining selection as general election candidates without having to face a vote in a convention.

The powerful National Constituency Committee issued letters instructing that one man and one woman be selected as candidates in three-seat Galway East and in the five-seat Louth constituency.

Only one woman had sought nominations in each constituency resulting in automatic selection for both Cllr Anne Rabbitte in Galway East and Emma Coffey in Louth ahead of the conventions.

They join Cllr Catherine Ardagh who won automatic selection last week to be the sole candidates in Dublin South Central after the NCC imposed a gender quota for its single candidate there.

In Dublin Central, party activist Denise McMorrow will battle the party’s European election candidate, Mary Fitzpatrick, after the committee also instructed delegates there to chose a single candidate who is female.

At a packed selection convention in Athenry, Mr Keaveney was well ahead with 185 votes after the first count, with Mr Connolly and Mr Finnerty on 113 and 109 votes respectively.

After the next count Mr Keaveney was confirmed as the second candidate, with a total of 233 votes compared to Mr Connolly’s 161.

The party’s other sitting TD in the constituency Michael Kitt announced his retirement recently. Mr Keaveney joined the party after leaving the Labour Party in 2012. There was some speculation his relatively recent arrival into the party might have affected his ability to get backing from delegates. That scenario did not materialise.

With the sitting TD in Louth, Séamus Kitt, also retiring, there are four candidates who will contest to be the second candidate at the party convention next Monday night.

Cllr Liam Reilly and Cllr Declan Breathnach, a candidate in the 2011 election, will go forward, as will John Temple and Anthony Moore.

The Fianna Fáil selection convention that has attracted most attention has been the one in Dun Laoghaire. The NCC, chaired by Cork North West TD Michael Moynihan is expected to meet tonight and issue its instruction letter for that constituency.

Cllr Cormac Devlin is believed to have the most support among the party membership in the constituency. He has said he will take legal action if any instruction is issued that only one candidate be selected and that person be female.

It is understood Mr Devlin will write to party headquarters this week asking for the instruction letter to be distributed early, rather than on the eve of the convention, as has been done in some instances.

The former TD Mary Hanafin and Cllr Kate Feeney are the other two people who have put their names forward in this four-seat constituency, which might represent one of the best hopes of Fianna Fáil taking a seat in the capital.

Fine Gael is also holding a number of conventions this week. The convention in Limerick County was held last night with sitting Deputy Patrick O’Donovan seeking a nomination.