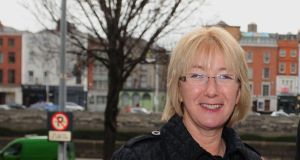 Senior FF figures are eager for the Dún Laoghaire candidate to be former minister Mary Hanafin. Photograph: The Irish Times

As Fianna Fáil appears poised to select former minister Mary Hanafin to contest the general election, the party believes it will defeat any legal challenge to its gender directives.

The party’s National Constituencies Committee met last night to discuss whether to issue a directive to choose a female candidate to stand in Dún Laoghaire.

It is understood that senior Fianna Fáil figures are eager for the candidate to be Ms Hanafin, who lost her Dáil seat in 2011.

Mr Devlin has said he will take legal action and may seek an injunction if the party orders members to select a female candidate.

“We have received legal advice and we are satisfied that any challenge will fall,” a source said.

In a letter to members, Fianna Fáil has advised that a direction will be issued from the National Constituencies Committee ahead of the convention on September 28th.

Speaking yesterday, Fianna Fáil leader Micheál Martin said he could see no “scenario unfolding” where legal action would be warranted