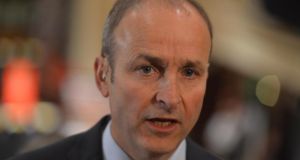 Fianna Fáil leader Micheál Martin alleged that the Government has “cooked the books” and misled the opposition and the public about its health budgets, as well as its plans for universal health insurance, over the past few years.

Mr Martin launched a withering attack on Taoiseach Enda Kenny and former Minister for Health James Reilly as his party’s annual parliamentary party “think-in” began in Roscommon yesterday. He alleged that decisions taken by Government on foot of what he claimed were fraudulent figures had put patients’ lives at risk.

Mr Martin said the Government had consciously and deliberately presented a budget last October knowing the figures to be wrong on health spending.

In relation to plans to dismantle the HSE and introduce a system of universal health insurance (UHI), Mr Martin said briefing papers prepared for the new Minister for Health, Leo Varadkar, showed conclusively that UHI was never going to happen.

He claimed the papers showed that the Department of Health knew the proposal was a “complete sham”.

He said that HSE head Tony O’Brien had stated in the service plan for 2014 that the net reduction in funding for the health services would be close to €1 billion, whereas the Government adjustment in the budget was €666 million.

“The Government has lived a lie for the past three and a half years on health,” Mr Martin charged.

The two-day meeting at the Abbey Hotel in Roscommon yesterday heard presentations on housing, on childcare and on the economy given by former government adviser Prof Alan Ahearne of NUI Galway.

Today Prof Yvonne Galligan from QUB will address the meeting on gender quotas. Fianna Fáil has the poorest gender balance of all parties among its elected representatives.

Responding to the latest poll findings, which shows his party with support levels of 18 per cent, Mr Martin denied that Fianna Fáil had become “becalmed” and was handing the initiative to Sinn Féin.

Up in the locals

He said his leadership would not become an issue in the event of losing the byelection.

He also said that it was Fianna Fáil pressure that had resulted in concessions from the Coalition in the areas of health and justice, and he rejected the assertion that Sinn Féin was more effective in opposition.

But he also seemed to rule out any deal with Fine Gael.

“In our view, Fine Gael has been very regressive and very right-wing in its policies and they would not in any shape or form be comfortable bedfellows with us.”