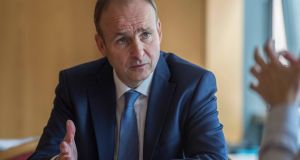 If Fianna Fáil makes gains across capital, Micheál Martin could be on his way back to Government Buildings. Photograph Brenda Fitzsimons

The Fianna Fáil tribe gathered recently to say farewell to the matriarch of one of its most famous families.

Ann Lenihan, wife of Brian snr and mother of Brian jnr and Conor, died late last month and was buried in Athlone after a funeral in Castleknock, where the family settled after moving from the midlands in the early 1970s.

Leaving Our Lady Mother of the Church in Castleknock, a member of the current Fianna Fáil parliamentary party fell into step with former taoiseach Bertie Ahern.

The brief conversation turned to the state of the party in the capital, where Ahern’s Fianna Fáil once dominated.

Earlier that week, Ahern had been in a packed Parnell Park, the home of Dublin GAA, for a semi-final of the senior football championship between St Vincent’s and Ballymun Kickhams.

Ever watchful, he couldn’t see any Fianna Fáil TDs or figures of note in the almost capacity crowd of just under 14,000. In his day, Ahern remarked, Fianna Fáil TDs would kill each other to be first at the turnstiles.

If Fianna Fáil wasn’t there on that midweek October evening for a glamour GAA match, it wasn’t anywhere in Dublin, he added.

Yet Ahern’s despair at the state of the party in the capital is matched by awareness among the leadership and headquarters of the work that needs to done to bring Fianna Fáil back to where it once was in Dublin.

Fianna Fáil won 44 seats at the last election, one in every constituency outside Dublin. The Dublin vote was also 10 per cent below the national average of 24 per cent, nowhere near enough to see Micheál Martin to Government Buildings.

As it prepares for an election sometime in the coming years, Dublin will be a key focus for Fianna Fáil and senior party figures have been closely monitoring local organisations and prospective candidates.

Party sources maintain that this is normal housekeeping and that the job of party headquarters is to keep the organisation fighting fit. The focus is as much on the next European and local elections, due in 2019, as it is on the next general election, which could come sooner, it is claimed.

For some at the receiving end of this attention, it feels slightly different. New constituency offices are being opened and the pressure is on to keep up the level of canvass and leaflet drops.

“They’re in quasi-election mode,” said one, who has been asked by party HQ about intentions of standing in the next general election. “Before you might have been seat target number 44,” said another. “Now it is like you are number two of three, but that is a good thing.”

While some party sources on the ground in Dublin say their latest encounters with HQ have been to push ticket sales for the Christmas draw, one councillor said: “They can use any excuse to come out and check up.”

Mary Fitzpatrick is likely to run again in Dublin Central and Senator Lorraine Clifford Lee will hope to be the second Fianna Fáil TD in Dublin Fingal, following Darragh O’Brien into the Dáil. Dublin Rathdown is a longer shot, with Senator Gerry Horkan seen as a possible candidate.

All the existing seats will need to held and, if Fianna Fáil is successful in making gains across the capital, Mr Martin could be on his way back to Government Buildings.

And Bertie Ahern will have some more company in Parnell Park.