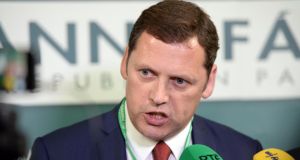 Mr Cowen said the housing crisis was not exclusive to Dublin, pointing out that 40 per cent of representations he received in his Offaly constituency related to housing.

The Irish Times reported that the Government will consider a scheme to relocate families to vacant homes across the country.

“We are in the business of being constructive in our Opposition but taking responsibility for the mandate that we have,” he said.

Fianna Fáil was launching a new policy the party said would revamp the quality and quantity of housing stock and bolster renters’ rights.

The document, New deal for renters and landlords, was presented by Mr Cowen in Dublin on Thursday.

Mr Cowen derided Minister for the Environment Alan Kelly as a “self-styled Action Man” in a statement distributed at the event.

“The rent crisis is growing in Dublin and right across the country. We can see the crisis at its worst with the soaring level of homelessness, but also in the student accommodation problems experienced by countless young people.

“Rent is becoming completely unaffordable for many and the quality of accommodation is far below standard. As it stands there are no incentives for landlords to stay in the system”

Mr Cowen said Mr Kelly had spoken of a “perfect storm” in the housing area but had “stood by while the storm has developed”.

He accused the Government of playing the needs of tenants and landlords off against each other.

The Fianna Fáil plan outlined three steps to address the crisis, focusing on tenants’ rights and affordable rent; quality of accommodation and adequacy of supply.

The policy includes a new ‘Deposit Retention Scheme’ under the remit of a reformed Private Residential Tenancies Board (PRTB). Deposits would be held by the PRTB rather than landlords in an attempt to reduce disputes.

The scheme would also involve ramping up measures for non-compliance and reducing administrative costs to ensure the system is self-financing.

The policy also calls for “family tenure” to strengthen security for families and long-term tenants renting their homes. It calls for a stronger local authority role in landlord certificating to ensure quality accommodation and also a strengthening of landlords’ rights.

A new tax regime for landlords to encourage investment is proposed, along with tax changes to help a group Mr Cowen termed “negative equity involuntary landlords”.

People who bought homes between 2000 and 2009 and who wish to rent out their homes to offset associated payments and charges against the rental income for a period of three years.

Property tax could be offset as an expense, for example, while landlords who allow for long-term leases could avail of full mortgage tax relief. The party also wants to see 150,000 new homes by 2021.

Dublin City Councillor Paul McAuliffe said: “This Government has made people homeless by failing to increase the rent supplement.”

Students who attended gathering to ‘face suspension’, UL says 16:42
Troops to be vaccinated before overseas deployment after Taoiseach’s intervention 16:00
Nphet considers asking all arrivals to give samples for Covid-19 genomic sequencing 15:53
Investment of €1.38bn required to protect Irish habitats – Cabinet told 15:51
Flooding ‘not an issue’ at most bog rewetting sites, committee told 15:50