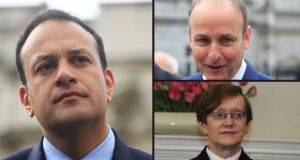 A rift has opened between Leo Varadkar and Micheál Martin over the appointment of Máire Whelan to the Court of Appeal. Photographs: The Irish Times

Taoiseach Leo Varadkar has said he will seek to rebuild trust with Fianna Fáil after the controversy about the appointment of the former attorney general Máire Whelan to the Court of Appeal brought relations between the two parties to their lowest ebb since the Government was formed, more than a year ago.

Fianna Fáil was cool on Mr Varadkar’s approach, however. Sources close to its leader, Micheál Martin, were sceptical about the new Taoiseach’s intentions to renew relations with the party.

The Irish Times understands that preparations for a general election will intensify in Fianna Fáil, with a number of constituency conventions likely to be scheduled in the coming weeks to select candidates.

Speaking in Brussels, where he is attending a summit of European Union leaders, Mr Varadkar insisted that Fine Gael had not breached its agreement with Fianna Fáil but said that “confidence building” measures may be necessary to keep the parties’ confidence-and-supply arrangement alive.

“Obviously, the week that has gone by I don’t think has been helpful for either party,” Mr Varadkar said. But he indicated he would offer Fianna Fáil an olive branch after the collapse of relations this week. “I do believe that over the next couple of weeks it will be necessary for us to work closely as parties and have some confidence-building moves or confidence-building gestures.”

He added that he would seek to establish a committee on mental-health reforms that Fianna Fáil has repeatedly sought. “And I think perhaps if we can move on some of those detailed issues in the confidence-and-supply agreement it can put things back on track.”

But Fianna Fáil pointed out that this step had already been agreed with both Mr Varadkar and his predecessor, Enda Kenny, and senior party figures expressed scepticism at Mr Varadkar’s offer.

Fianna Fáil sources say co-operation with the Government in the Dáil is now in doubt, and an agreement between the two parties for the House to sit a week longer in July than previously scheduled is in doubt.

Mr Martin’s party stressed that it wished to see “a number of areas addressed under the confidence-and-supply agreement” and agreed that mental health was one of them.

“Our party leader has been quite open and vocal about the need to introduce and pass legislation that is well overdue during the remainder of this session,” a spokesman said.