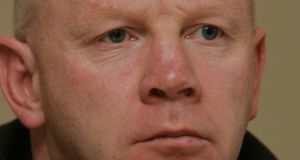 John Brassil: Cllr Brassil is a qualified engineer has been a councillor since 1999. Photograph: The Irish Times

The current Cathaoirleach of Kerry County Council, John Brassil, has been selected as the Fianna Fáil candidate in the next general election in what will be a single five-seater constituency.

Cllr Brassil, a pharmacist by profession, and a qualified engineer has been a councillor since 1999. Married with three children he had twice previously sought but narrowly lost the nomination to run for the Dáil. Some 1,200 of the 1,500 Fianna Fáil members in Kerry voted on Sunday and the result was declared in Tralee shortly before midnight.

Four candidates went forward at the convention. Cllr Michael O’Shea from the South and West Kerry electoral area and the only one to stand from the current Kerry South constituency and Tralee area Councillor Norma Foley were both eliminated.

Cllr Brassil outpolled Cllr Thomas McEllistrim, the former TD by 637 votes to Cllr McEllistrim’s 532 at the final count. The quota was 570. Voting took place in two hotels in Tralee and Killarney between 2pm and 7.30pm and all votes were counted in Tralee.

While a single candidate was selected at the convention, a second candidate from the former Kerry South constituency will be added. Informed sources have not ruled out the addition of former Kerry footballer and sports columnist, Darragh O’Sé, being mentioned again in Fianna Fáil circles today.

Both Senator Mark Daly, who is from Kenmare and Cllr Niall Kelleher, a councillor representing the Killarney area, withdrew their names before convention. Cllr Norma Moriarty, from Waterville, contrary to a number of media reports, did not seek the nomination.

The former ceann comhairle and TD for Kerry South, John O’Donoghue, was expected to seek a nomination but confirmed a fortnight ago he was not doing so. Mr O’Donoghue, who now practices as a barrister, lost his seat at the last general election.