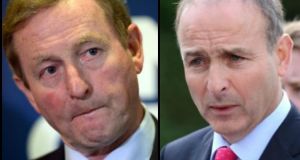 Fianna Fáil will allow the budget to pass by abstaining in Dáil votes, but it is objecting to two key measures: first-time buyers scheme and subsidised childcare plan. Photographs: The Irish Times

Fianna Fáil forced the Government to accept a greater emphasis on public spending over and above what was contained in the deal struck with Fine Gael to facilitate a minority administration, Micheál Martin told his TDs and Senators last night.

The aftermath of yesterday’s budget also saw others involved in drafting the €1.3 billion package rush to take credit for it, with Minister for Transport Shane Ross saying the imprint of the Independent Alliance was all over it.

While Fianna Fáil will allow the budget to pass by abstaining in Dáil votes, it is objecting to two key measures: the first-time buyers scheme and the subsidised childcare plan.