President Michael D Higgins is seen as a ‘champion of the left’, says Kerry Senator 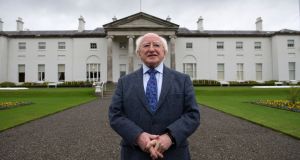 President Michael D Higgins at Áras an Uachtaráin: Mr Higgins has said he will make a decision on his future in the next year. Photograph: Frank Miller

Fianna Fáil’s leadership is facing internal pressure to field its own candidate in next year’s presidential election. A number of parliamentary party members, led by Kerry Senator Ned O’Sullivan, will be calling at the party’s annual “think-in” next month for a Fianna Fáil candidate to contest next year’s election.

Mr O’Sullivan has argued that President Michael D Higgins said in 2011 he intended to serve only one term. He also said Mr Higgins was seen as a “champion of the left” and he believed citizens who did not share that view should be given an opportunity to vote for a candidate who offered an alternative perspective.

Party leader Micheál Martin and senior colleagues have not publicly expressed an opinion on whether they would support Mr Higgins’ serving a second seven-year term. The 76-year old’s first term comes to an end in November 2018.

Senior Fianna Fáil sources have said an uncontested second-term for a popular President might be the preferential outcome, given that there are two other costly elections (a general election and the European elections) on the horizon over the next two years.

Mr O’Sullivan told The Irish Times that he would fiercely oppose an uncontested “canonisation” for Mr Higgins, which he added would test Irish society’s democratic values. He asserted that the president was elected on the basis that he would not seek a second seven-year term and people believed him.

In a subtle change of position, the President’s public position no longer relates to a single term. Rather, he has said he will make a decision on his future in the next year.

Responding to a query, Mr Higgins’ spokesman said: “Article 12.4.4. of the Constitution outlines the procedure available to incumbent or former presidents. The President has not yet taken a decision on this exercise of his discretion on this matter.”

Mr O’Sullivan said: “I would like to see a candidate that Fianna Fáil and other mainstream parties could endorse and I have spoken to many parliamentary party colleagues who have agreed with me.”

He said he would raise the matter the party’s annual parliamentary party “think-in”, which is being held in Longford, and garner support for a Fianna Fáil candidate.

“The left have had serious successes in recent events. Let’s test how fundamental their support is. I would welcome an early announcement from President Higgins, who has always championed honesty and transparency.”

Several other national politicians and groups have called for a contested presidential election. They include Independent Alliance Minister of State Finian McGrath and the Independent Senator Gerard Craughwell.