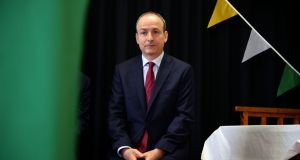 Micheál Martin: has been back on the doors since last year. Photograph: Eric Luke

The foundation of all electoral success is worn shoe leather but, for Micheál Martin, canvassing is an article of faith.

The Fianna Fáil leader attributes his party’s relative success at the last election – and his correct reading of the public mood – to the consistent tending of doorsteps in constituencies across the country over a number of years.

When the Dáil is sitting, he canvasses with candidates in Dublin in the evening, and he has been back on the doors since last year.

He was merely picking up where he left off rather than preparing for an impending election, but senior TDs have been ordered in recent weeks to follow his lead by spending week nights canvassing in Dublin.

The past two weeks have provided added impetus for such canvassing.

One of the redrawn constituencies was Dublin North West, which lost a number of areas to neighbouring Dublin Central, a move seen as detrimental to Fine Gael TD Noel Rock.

Rock narrowly beat Fianna Fáil’s Paul McAuliffe to a Dublin North West seat and the constituency is high on Martin’s target list. He was out knocking on doors with McAuliffe last Wednesday, the fourth time since February.

There are other stirrings of increased activity around Dublin. Catherine Ardagh, who lost by a whisker in Dublin South Central, opened a constituency office this week, and her Seanad colleague Lorraine Clifford Lee will do the same in Dublin Fingal soon.

“We are preparing for an election but I am not ordering election posters,” said one Fianna Fáil candidate. “I would love one, but I don’t think it is imminent.”

This view is widely shared in Fianna Fáil, although many agree the 12-18 month election cycle is well under way.

With the constituency commission complete, selection conventions will begin and election preparations will intensify further.

The Fianna Fáil national constituencies committee has also significantly stepped up its operations. It is assessing the constituencies, checking on candidates and identifying others who may be interested in running.

“Yeah, they would be sounding people out,” said one possible candidate.

In a sign that the party hierarchy is serious about preparations, the committee has decided Fianna Fáil must be election-ready early next year.

Yet Martin is adamant that the confidence-and-supply deal that underpins the Fine Gael minority Government will run its course to a third budget in October 2018.

But the election drum beats from outside his office are growing louder.

Some of his TDs are increasingly frustrated with the confidence-and-supply deal. They also, of course, covet ministerial office.

A cohort of influential frontbenchers – such as Billy Kelleher, Timmy Dooley and Michael McGrath – is said to favour an early election.

Others tire of the quotidian grind of confidence and supply, including justice spokesman Jim O’Callaghan. Dara Calleary, the Mayo TD and public expenditure spokesman, is also known to chafe at the deal’s restrictions.

“Our members are getting frustrated,” said one TD. “They keep asking why we are keeping these guys in office. They understand when you explain, but you always have to explain.”

“But, then again, we’re all it,” the source said, adding that the natural consequence of everyone behaving as if an election is approaching is an election itself.

Despite Martin’s wishes, the tide of an election early next year may prove impossible to hold back.

Why would Fianna Fáil not just collapse the Government? That question has been asked on repeated occasions in recent months, from the Maurice McCabe affair and water charges to the appointment of former attorney general Máire Whelan to the Court of Appeal. The reasons for staying put were numerous.

Firstly, the Government has only been in place since May 2016 and the public is unlikely to reward those responsible for a snap election. Secondly, the issues in question, McCabe aside, were not of such a magnitude to warrant an election. And thirdly, the party was not yet ready.

By early next year, two of the three years of the confidence-and-supply deal will have passed, the party will be ready and TDs will be straining at the leash.

Candidates will be showcased at this October’s Ard Fheis and the party accounts will be swollen by the annual draw in December.

The scales will have tipped towards an election, if the polls are favourable.

With the tinder set, the spark of an issue big enough to warrant an election could prove impossible to extinguish.