Fianna Fáil can win most seats in election, Martin says 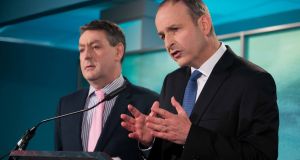 Fianna Fáil leader Micheál Martin has said his party is capable of winning the most seats in the general election and providing an alternative government to Fine Gael and Labour.

Speaking after the launch of Fianna Fáil’s election campaign in central Dublin on Wednesday, Mr Martin pointed to the party emerging as the largest after the 2014 local elections. He also said Fianna Fáil was more competitive than it had been given credit for in many constituencyies.

In an interview with The Irish Times, Mr Martin said though the local elections were a different type of election, the party had out-performed the polls. He argued that it could repeat the performance on February 26th - polling day.

Asked what the party would do if that were to happen, Mr Martin would not go into specifics.

“We will go into government, again deciding on whom the people decide to give the maximum number of votes to,” he said.

“But there are other parties. Obviously we want to create a different type of Ireland in the next five years. That will be the litmus test of us going into government.”

Mr Martin told a press conference that the party was going to run an active campaign in every community. He said it was running 70 candidates, providing a mix of “proven experience and new faces”

“We will hold this Government to account and promote a positive message. We want an Ireland for all,” he said.

Mr Martin repeated his attack oin Fine Gael as a “party of the wealthy”. “Five budgets out of five were weighted in favour of the wealthiest,” he claimed.

He said Fianna Fáil was offering a choice on the way we want to take this country forward.

“Getting access to health, young people getting access to education, creating decent quality jobs, good quality homes, and ending homelessness. These are our priority issues...That is a choice People need a choice. It can’t be a coronation.”

Asked was there one thing that distinguishesd Fianna Fáil from its rivals, he replied: “We have a far stronger social conscience in terms of getting a fairer society in place.”

He told the press conference that Fine Gael and Labour were claiming credit for measures they opposed before last election “I reject the notion that people must choose between a strong economy and decent society,” he said.