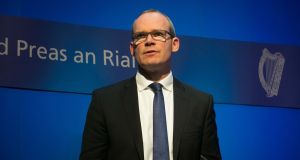 The “help-to-buy” housing scheme announced in Budget 2017 has become a point of tension between Fine Gael and Fianna Fáil and could jeopardise the “confidence and supply” agreement struck between the parties.

Fianna Fáil is to table a number of significant amendments to the Finance Bill, which gives legislative backing to the initiative, when it comes before the Dáil later this month.

The party has claimed the €600,000 threshold makes it into a “mansion grant” and has also argued the incentive should be extended to second-hand homes.

The scheme, spearheaded by Minister for Housing Simon Coveney, will provide first-time buyers with a rebate of tax paid over four years.

However, first-time buyers who buy new homes will still be entitled to the rebate for houses worth up to €600,000, even though the rebate doesn’t apply to them.

Mr Coveney yesterday indicated he would be standing his ground and would not consent to the Fianna Fáíl amendments, which he said would undermine the whole basis of the grant.

“I am more than willing to listen to Fianna Fáil’s concerns, but Fine Gael stands over the scheme,” he said.

“Any attempt to extend it to second homes is madness and would drive prices up. I will continue to consult with Barry Cowen [Fianna Fáil’s housing spokesman], but I am not committing to making any changes,” he said.

“And the scheme should come as no great surprise to Fianna Fáil. I have been talking about it since July 19th.”

The Minister said the argument that the rebate would drive up prices over time did not hold water because new homes for first-time purchasers were simply not there at present.

He cited statistics showing only 24 per cent of house purchases in 2015 were by first-time buyers, when normally they would comprise half of the market.

He said a couple, both working and seeking their first home in Dublin, could spend more than €500,000 for a modest house in many areas.

Mr Cowen said the scheme was driving up house prices and did nothing to help families trying to purchase their first home.

“I do not agree with this scheme overall, but surely the Minister can see the blatant unfairness of it at its extremes. This is not the squeezed middle,” Mr Cowen said.

“This is not the ordinary young couple, just married, looking to buy a semi-D and start a family,” Mr Cowen said.

“This is a mansion grant. It will help turn a two-tier recovery into a two-tier property market.

“Those first-time buyers a few years into their careers, struggling to save and pay their rent, will not be served by further spiking prices on homes that will never be within their reach.”