Parties must select 30 per cent women to run in upcoming election, or face funding cut 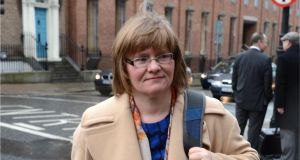 Orla O’Connor: “When women are selected, they get elected.” Photograph: Dara Mac Dónaill

Under the Electoral Amendment Political Funding Bill 2011, parties must implement a gender quota for the upcoming election and must select at least 30 per cent women. Funding from the exchequer will be cut by 50 per cent if they don’t.

Fianna Fáil is lagging behind its rivals, with women making up only 22 per cent of candidates, although the party has yet to hold selection conventions in 11 constituencies.

According to figures compiled by Dr Adrian Kavanagh of NUI Maynooth, 42.3 per cent of Labour’s candidates are women (with 23 out of 40 selection conventions held). For Sinn Féin, which has just one convention to go, women make up 38.3 per cent of those selected.

Fine Gael has selected 31.3 per cent women candidates, with 24 out of 40 selection conventions complete.

Among the Independents declared so far, 27.5 per cent of candidates are women, according to Dr Kavanagh.

At 86, the number of women selected to date for the next general election is equal to the number that contested in 2011 with a total of 273 candidates picked. In 2011, 566 people contested the election.

Louise Glennon, women in leadership officer with the National Women’s Council of Ireland (NWCI), said the total of 86 women selected would grow before nominations closed.

Ms Glennon said the quota was “a blunt but necessary tool” but further changes were necessary to ensure women elected to the Dáil sought re-election and promotion to influential decision-making roles in cabinet.

The use of remote voting, the implementation of a code of conduct for debates and introduction of maternity and paternity leave are some of the changes the NWCI believe would make the Oireachtas more woman and family friendly.

“The results show that when women are selected, they get elected,” said Orla O’Connor, director of the NWCI.

“The percentage of women selected to run in the next election is 31.5 per cent. If this figure holds or, indeed, increases and more candidates declare, we will stand to have record numbers of women seeking election, and being elected,” Ms O’Connor said.

The quota of women candidates required to ensure State funding is not reduced will rise to 40 per cent seven years after the next general election.