Party open to proposals to hold back money to protect against economic shocks, says Calleary 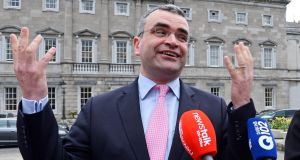 Fianna Fáil deputy leader Dara Calleary says his party is open to any Government proposals to hold back money available to the State in this year’s budget. File photograph: Eric Luke/The Irish Times

Fianna Fáil is willing to consider any proposals from the Government to hold back some of the money available to the State in this year’s budget, the party’s deputy leader has said.

Dara Calleary, recently appointed by Micheál Martin, said his party wanted to ensure Ireland is protected from any economic shocks that may arise as a result of Brexit and potential international trade wars. His comments mark a change of view within Fianna Fáil.

Minister for Finance Paschal Donohoe is expected to have more than €3 billion to spend in the final budget of the confidence-and-supply deal in October.

Senior Fine Gael figures believe some of this money may need to be held back because of fears of the economy overheating.

Fianna Fáil and Fine Gael have already agreed that €500 million from the next budget should be held in a so-called “rainy-day fund”. However, a view has hardened within Government that even more should be held back.

In a change from views previously expressed by senior figures in his party, Mr Calleary said Fianna Fáil is “open to proposals” on this.

“We have achieved two budgets,” Mr Calleary said. “We have done it on the basis that both parties are open to proposals and open to discussions.

“The rainy-day fund is our proposal and something that we are committed to. We want to ensure that we are as protected as possible. Particularly in the world context of trade wars emerging, the uncertainty of Brexit, and as one of the most open economies in the world. Let them make proposals to us.”

Mr Donohoe says it is his intention to again reduce the Universal Social Charge and raise the threshold at which people pay the higher rate of income tax.

He also said he wants the confidence-and-supply deal renewed “later in the year”. “I believe that when we get into 2019 stability in the context of what will be happening with Brexit, in particular, will be really important.”

Mr Donohoe’s statement reflects a view within Fine Gael that the review of the deal underpinning the minority government will now not happen until after the budget.

Senior figures previously wanted to open talks before the Dáil summer recess, but Mr Martin has repeatedly said the confidence and supply deal says the review will take place after the final budget.

The document commits Fine Gael and Fianna Fáil to reviewing “this framework agreement at the end of 2018”.