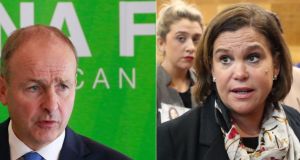 The bitter exchanges between the two party leaders followed a lengthy debate and voting on the position of taoiseach. Photographs: Nick Bradshaw/The Irish Times and Gareth Chaney/Collins

Fianna Fáil leader Micheál Martin renewed his opposition to talks with Sinn Féin on Thursday in a swingeing attack on the party after voting on each of the four leaders for taoiseach was completed.

But Sinn Féin leader Mary Lou McDonald accused him of a “diatribe and vitriol” that had served him very badly in the election.

And she warned that she would not tolerate the “grossly offensive” suggestion that the citizens who voted for her party should be left in perpetuity on the sidelines “because Micheál doesn’t like us”.

The bitter exchanges between the two party leaders followed a lengthy debate and voting on the position of taoiseach in which Ms McDonald received the highest number of votes.

She said, to applause from her colleagues, that for the first time a nominee from outside Fianna Fáil or Fine Gael managed to garner the greatest number of votes for the position of taoiseach.

Mr Martin said Sinn Féin’s “efforts to legitimise a murderous sectarian campaign keeps alive a narrative which is used by dissidents to legitimise their campaigns – but this is more fundamentally about today”.

He said that “every single time an issue arises about the behaviour of people associated with the Provisionals movement and today’s Sinn Féin the response is to attack and dismiss”.

“Only when the evidence keeps piling up and the political pressure grows is there any movement. Offers to meet are expressed and calls for co-operation with law enforcement are issues – but nothing ever happens,” he said. “No one ever comes forward. Victims never get justice.”

He said “repeated anti-Semitism is brushed aside as a small slip”.

“Let’s not forget that there have already been 27 representatives that have resigned from Sinn Féin citing systemic bullying.

“Aggressive online abuse towards political opponents is not an oversight it is a strategy.

“And of course, there is an approach to government which has received almost no attention in the Dublin-based media but has raised enormous concerns in Northern Ireland.”

He said the use of front groups to receive public funding, the forcing of employees and representatives to sign over wages to the party and the operation of a shadow system of control over ministerial decisions are not inventions of political opponents.

“They have been documented in great detail.”

The “glorifying of the Provisional IRA isn’t an accident of one Deputy’s exuberance”, as Ms McDonald had claimed, he said.

“She herself has praised Provisional IRA units and when she ends speeches with ‘Tiocfaidh ár lá’ she knows full and well what the use of that phrase means.”

But the Sinn Féin leader accused him of having a “very narrow and bitter mind”. He proposed to “continue the diatribe and vitriol that sustained him and served him very badly in the election campaign”.

Ms McDonald said that two parties but Fianna Fáil in particular decided in “an arrogant, dismissive, self-righteous way to disregard entirely the representative of more than half a million people”.

She said there was an element of belief that it was “capricious nonsense” by the electorate to vote for Sinn Féin but nothing could be further from the truth.

“Fianna Fáil and Fine Gael have run the show for almost a century and by Christ they’re not minded to let it go,” she said. “And that really is what this is all about.”

People had told her very clearly that they were voting for her party to be in government. It was not a protest vote but for a different government.

Earlier, Taoiseach Leo Varadkar said his party would “stand by the State and republic” and “if we’re needed to give the country political stability and good governance we’re willing to talk to other parties about that”.

But he said “the onus is in the first instance is on those who made enormous promises of change”.