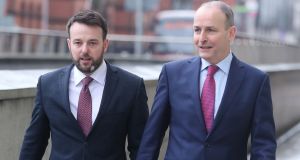 Colum Eastwood of the SDLP and Micheal Martin of Fianna Fáil arriving for at a joint press conference in Belfast. Photograph: Niall Carson/PA Wire

The Fianna Fáil and SDLP leaders Micheál Martin and Colum Eastwood announced a new “partnership” between their two parties in Belfast on Thursday.

Mr Martin said the partnership would be concentrated on developing a “new agenda for Northern Ireland and for Ireland as a whole”, while Mr Eastwood described the link-up as an “historic moment” for both parties and one that marked an “important contribution in finally breaking the cycle of vacuum and division which has failed our people over the last two years”.

As part of the partnership both leaders during a question and answer with the press made clear they would not be standing joint candidates in May’s local elections in Northern Ireland.

Mr Martin, however, said Fianna Fáil would be assisting the SDLP in May and that his party planned to “bring extra capacity” to the SDLP during the campaign.

Mr Martin declined to go into “hypothetical questions” about whether and when in the future the parties might or would stand joint candidates.

Both Mr Martin and Mr Eastwood were asked a number of times were they definitively ruling out a merger at any stage in the future.

“This is the journey we are on; this is the decision we have taken,” said Mr Martin. He later added that he did not have “a crystal ball” into the future.

Eleven of the SDLP’s 12 Assembly members were present with the notable absence of South Belfast MLA Claire Hanna, who has expressed serious reservations about the partnership. Asked about her future within the SDLP Mr Eastwood said he did not want to lose anyone from the party.

Mr Eastwood said the partnership would be organised through three central themes: “a politics that works”; better public services; and “uniting Ireland’s people”.

The latter would focus on addressing “practical steps for greater co-operation and the shape of future possible constitutional arrangements should a unification poll be held and passed,” he said.

He added that policy proposals will be prepared in seven areas: economic development; Brexit; “the unity of our people”; health services; education, housing; and reforming institutions.

Mr Eastwood said the partnership sought “to deliver an alternative to a government record of mismanagement, incompetence and inertia delivered by the DUP and Sinn Féin”.

“The SDLP and Fianna Fáil will agree and deliver joint policies which can be effectively implemented in government across the island. In doing so we will be jointly delivering a credible programme for change across Ireland,” he said.

He added: “Our absolute focus will be on trying to reinvigorate the agenda for shared peace and prosperity on this island. Through a programme of joint working groups, research and public engagement we will work together on proposing alternatives for critical issues.”

Mr Martin said “progress was not achieved by accepting current limits – but by looking for a new agenda”. He added that the “simple fact is that today Northern Ireland has no credible agenda for its economic development, for tackling entrenched poverty and for breaking the cycle of tension and mistrust”.

Mr Martin said it was against the background of Brexit and political stalemate “that a discussion was begun a year ago with the SDLP about how we could co-operate”.

“Fianna Fáil and the SDLP have shared much and have achieved much over the years. So it was obvious that we should discuss ways that we might work together at this time of crisis,” he said.

“The focus of our discussions has, at all stages been on how to develop a new agenda for Northern Ireland and for Ireland as a whole. There is a desperate need to shift the focus away from an obsession with who holds power and onto the much more important issue of what is done with that power.

“We need a new agenda for social protection, shared services, North/South bodies and many other areas, and this work will be progressed. At all stages this work will reach out to people of different traditions and none,” he said.

Mr Martin said Fianna Fáil had “never for one moment stepped away from our core belief that a united and republican future is the best way of serving the interests of all who live on this island – but equally we have shown how it is possible to disagree on this while working together on other issues”.

Mr Eastwood said he and Mr Martin had thought deeply on how best to respond to Brexit and the “deepening division and crisis in our politics” and how to “act for the generations to come”.

The party had agreed a “common proposal on how best to respond to the crisis which consumes our politics”, he added.

“That was the starting point of these discussions and it remains our guiding purpose,” he said.

“Faced with this deepening crisis our challenge is to think deeper and to look longer,” said Mr Eastwood.

“Both the SDLP and Fianna Fail have agreed to work in partnership on an unprecedented programme of public engagement in Northern Ireland which can help frame an ambitious and practical agenda for the future of this island and our people.

He and Mr Martin were agreed that the “scale and longevity” of the crisis that was further underlined by last weekend’s bombing in Derry required a “new agenda and a new response”.

“Our parties are determined to work together to try and change the failure our politics lie frozen in. We will not do so by gestures or gimmicks or through photo opportunities,” he continued.

“Northern Ireland has had more than enough of that kind of party political vanity. Instead we will do this through a focus on policy and issues, not party or sectarian positioning.”

Mr Eastwood said he accepted and respected and valued that such change “may be uncomfortable for some in both our parties”.

“This is a big change and a big step in the history of both our parties and such change is ever easy,” he added.

He said the SDLP would have the final say on the partnership. “We are prepared to take risks to bring about change for our people because we recognise that continuing on as normal is not an option”.

Mr Eastwood described the partnership as an “unprecedented and historic response to meet those huge challenges before us”.