In any coalition, compromise will have to be reached on Irish Water and the USC charge 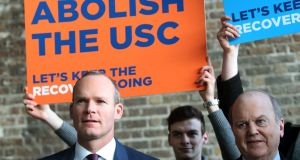 Many in Fine Gael have acknowledged that its policy of outright abolition of the USC was not an electoral success. Photograph: Brian Lawless/PA Wire

While Enda Kenny spent much of yesterday listening to the proposals of Independent TDs, recent days have seen others around Leinster House examine documents that will have a greater impact on how the country is governed.

Whatever the outcome of next Thursday’s Dáil vote for taoiseach, as well as a likely second vote some weeks later, it is very difficult to see past some sort of governing arrangement between Fianna Fáil and Fine Gael.

Some of those who expect to be involved in thrashing out an agreement from each party have begun poring over their rivals’ manifesto in order to be ready for negotiations, if and when they come.

The main matters are likely to be on the budgetary front and most political sources say that an arrangement between Fine Gael and Fianna Fáil, with one of them heading a minority administration, will have to pass at least one budget. They both accept the same broad fiscal parameters set down under EU rules but how do their big-ticket policies compare?

Fianna Fáil wants to end water charges for a period of at least five years and abolish Irish Water as an entity. The lost revenue from scrapping the charges would be replaced by a state subvention to a new “national water directorate” to replace Irish Water.

County councils would be given back the responsibility for the delivery of water services, while the new directorate would own €11 billion in national water infrastructure assets and set national standards.

It will also implement an existing €5.5 billon capital investment plan and €1.6 billion in savings and efficiencies outlined by Irish Water.

Nevertheless, if the two parties are to do business, a deal will have to be done. Fianna Fáil accepts that there is a need for water charges but wants the date of their introduction deferred.

The view among party TDs varies, with some suggesting they could settle for lower charges or relief for the lower paid and pensioners, while maintaining that Irish Water should be abolished. Others say that charges must go for five years at least, but believe the company could remain – even if it is rebranded and somewhat restructured. One source pointed out that both Fine Gael and Fianna Fáil want efficiencies in how water is delivered.

The resistance in Fine Gael to any substantial change is likely to be stiff, given how politically costly the issue has been. Some TDs maintain that to jettison water charges now would make the party seem desperate for power.

It also proposed a number of other taxation measures, such as equal treatment for the self-employed, capital gains tax relief for start-up companies and reducing the rate of employer’s PRSI.

Fianna Fáil has promised to abolish USC for those earning less than €80,000. This process would start in the next budget with the abolition of the 1 per cent rate that applies on income up to €12,012.

Its other taxation measures also include equalisation for the self-employed, cuts in capital gains tax for entrepreneurs and relief on employers’ PRSI relief for start-up companies taking on new workers.

However, the party has said that it will prioritise public services over tax cuts if there is an economic slowdown.

Even the differing views within Fine Gael on the issue indicate that Fianna Fáil may be able to influence future taxation policy in its direction, or to favour public spending over tax cuts in the next budget.

The two parties have broadly similar taxation policies in other areas so compromise should be possible, and would allow Fianna Fáil show that it has successfully influenced Fine Gael’s approach.

The source argued that the future of the banking sector was of far bigger importance but had received scant attention. The sale of 25 per cent of the State’s share in AIB is due to take place this year and Fianna Fáil wants EBS taken out of AIB to become a standalone mortgage provider under State ownership.

Party sources say this would be a major element of any negotiations but Fine Gael is unlikely to be keen on this since it would decrease the value of AIB.

Fianna Fáil also wants a white paper to be commissioned on the future of the banking sector.

Fine Gael is also unlikely to favour Fianna Fáil’s proposal to introduce a State top-up to mortgage deposits for first-time buyers but the parties have almost identical proposals in other areas, such as increasing the State pension and living alone allowance.