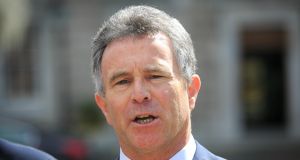 The Government’s capital spending plan has been dismissed as a “wish list” drawn up with the general election in mind by Fianna Fáil’s public expenditure spokesman Seán Fleming.

Mr Fleming insisted the programme was heavily dependent on private investment, saying there was no guarantee the Coalition would be able to secure the necessary investment to deliver the planned projects.

“The people of Ireland will not be misled by Fine Gael and Labour with this phony programme,” he said.

Mr Fleming said elements of the plan covered a 10-year period, adding the Government had previously missed its own targets on the provision of broadband and delivery of the National Children’s Hospital.

Asked what Fianna Fáil would do differently, he said the party would publish its “alternative budget” and capital investment proposals in a week’s time.

Many Opposition politicians complained they had little time to digest the contents of the plan, which was launched on Tuesday afternoon.

Sinn Féin said it would increase capital spending by significantly more than the Government had committed to and would bring capital spending as a percentage of GDP in line with the European average.

The party’s capital spending proposals for next year will be included in its “alternative budget” to be published in the coming week.

Sinn Féin finance spokesman Pearse Doherty described the Government’s plan as “very unambitious”. He said the Government was simply restoring cuts it had made during its term of office.

“It is truly amazing what the Government can get away with when its PR machine kicks into overdrive,” Mr Doherty said.

Social Democrats TD Catherine Murphy said the plan lacked strategic vision. “It looks far more like a pre-election list of items that are one for everyone in the audience,” she said.

Renua deputy leader Billy Timmins said the plan signalled an element of return to what he described as “the Bertie Ahern era”, with Ministers hailing projects in their constituencies.

The Green Party claimed the plan contained nothing new of note, saying it relaunched existing projects with some minor additions.