Micheál Martin: Events of that Easter belonged to no party but to the Irish people 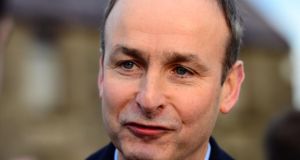 Micheál Martin: “It is ironic that the only party with no direct connection to 1916 is the one most likely to try and abuse it for political purposes.” Photograph: The Irish Times

Launching his party’s commemoration programme for the 1916 Rising on Friday, Mr Martin said the events of that Easter belonged to no party but to the whole of the Irish people.

In comments clearly directed at Sinn Féin, he said: “It is ironic that the only party with no direct connection to 1916 is the one most likely to try and abuse it for political purposes.”

The launch at the College of Surgeons was attended by descendants of those who took part in the Rising. They included Maureen Haughey, daughter of former taoiseach Seán Lemass and widow of another former taoiseach Charles Haughey. Another direct descendant was Joan Dory, whose uncle Philip Clark was killed on the front steps of the College of Surgeons during the Rising.

Galway West TD Eamon Ó Cuív is chairman of the party’s commemoration committee and unveiled a series of events this year and next year, including a summer school in Ros Muc (where Pádraig Mac Piarais had a cottage), a public lecture series, and the presentation of Fianna Fáil medals to Easter Rising relatives.

There is also a strong Irish language element.

Mr Martin said the Rising should be celebrated shamelessly and without inhibition.

“It was a truly watershed in terms of the history of the country and in terms of global events. It was the first colony that the empire lost and inspired others to strike out for their freedom.”

He said the events would be complementary to the Government’s programme. While he was critical of its engagement with opposition parties, he said Fianna Fáil would give positive support to the State commemoration.

Asked if Fianna Fáil was wrapping the green flag around itself for electoral purposes, he replied: “We never had to create a new history or narrative or distort existing history.

“We are self confident in the origins of the party.”

He also said it was important for younger people within Fianna Fáil to understand the origins of the party. “There is a view that we need to go back to the principles and idealism of the founders of the party and the Rising itself.”

In his speech Mr Martin said that Countess Markiewicz had been in command of the rebels in the College of Surgeons and had also chaired the meeting that founded the party a decade later.

“What was achieved in Easter Week 1916 was the very definition of a revolutionary event. It did change everything. It opened new possibilities and started a distinct new tradition which drew on the past but reflected modern realities,” he said.

“It reflected an intensely modern idealism which was rising through much of the world. It was not some traditional throw back – it was the exact opposite.”

Mr O Cuív said : The Easter Rising is a seminal moment in Irish history. It and the election of 1918 brought into being an independent Irish parliament – Dáil Éireann. This should be commemorated by all Irish people.”

Mr Martin was also asked about the latest opinion polls which show Fianna Fáil behind Fine Gael, Sinn Féin and Independents. He said he did not agree with an assessment of a colleague that the poll results were “depressing” but said they were disappointing.

“We are doing well in some areas. In other areas we have to pick up clearly,” he said.