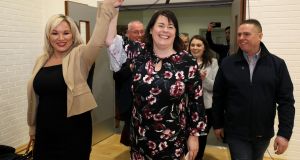 The outgoing Sinn Féin MP Michelle Gildernew was re-elected with a 57-vote majority after a recount in the Fermanagh and South Tyrone constituency.

The result was announced this morning at the Omagh Leisure Complex after more than eight hours of counting.

At around 4 am it was announced that there would be a recount, with sources saying that Gildernew was just 62 votes ahead of Tom Elliott of the UUP.

Half an hour earlier Elliott had given an interview to the BBC during which he’d described the count as a “real nail-biter” and said that no one knew “what was going to happen here at Fermanagh South Tyrone.”

There was also confusion about one box of votes, which had apparently managed to come to the count centre while the paperwork associated with it went somewhere else.

“It was so tight, you would nearly prefer to lose by 5,000 votes than 57 votes,” Mr Elliott said after the final result emerged.

There were five candidates in the constituency, with Matthew Beaumont of the Alliance Party, Adam Gannon of the  SDLP and Caroline Wheeler, an Independent, also having put their names forward.

The percentage turnout was down on 2017, and both the leading candidates also polled fewer votes then in the last election.

The DUP decided to stand aside in the home constituency of its leader, Arlene Foster, in a now failed bid to win the seat back for a unionist candidate.

Apart from her defeat in 2015, Ms Gildernew has won in this constituency every times since she first contested it, in 2001. The former IRA hunger striker Bobby Sands was elected MP for Fermanagh and South Tyrone in 1981.

Brexit was a major topic during the campaign, with Ms Gildernew, a former minister for agriculture and rural development in the Northern Ireland Executive, calling on voters to reject Brexit and “Tory austerity”.