Sinn Féin finance spokesman says he has no leadership ambitions 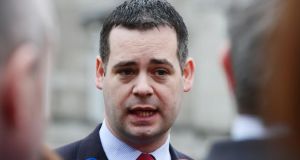 Sinn Féin spokesperson for Finance Pearse Doherty has likened his party to Syriza in Greece saying that opponents such as Fine Gael have tried “unleash the fear factor” about both. Yet, he said, Minister for Finance, Michael Noonan, was now “supporting one of their (Syriza’s) main policy options today on the front page of The Irish Times.”

Mr Doherty, who was a guest on the Inside Politics podcast, was referring to comments made by Mr Noonan yesterday at a gathering of Irish ambassadors and civil servants. During the event, Mr Noonan said he was broadly supportive of a European debt conference which might reconsider Irish, Greek, Spanish and Portugese debts.

The conference has been advocated by the left wing Syriza movement in Greece. In 1953 a similar meeting was held in London and resulted in a write off of 50 per cent of Germany’s debt and an extension of the repayment period for the remainder.

Syriza is currently leading opinion polls ahead of the Greek elections, due to be held on January 25th.

In the 2012 Greek elections Syriza became the second largest party in the Greek parliament but declined an invitation to join a coalition government and remained in opposition. It was suggested in the podcast that this may serve as possible inspiration to Sinn Féin the next election.

In response Mr Doherty said that Sinn Féin wants “to be in government in the South but it’s not at any expense. We want to be leading a government of the left.” He also said that this was a “long game” and that “this isn’t about rushing into government for the sake of it.”

The Donegal South West TD also called for an independent costings unit to be established to value the budgets being proposed by political parties and enable “a proper ideological debate” rather than the “current childish debate about whether your numbers add up.”

Sinn Féin were the only political party, he added that had submitted their figures to the Departments of Finance and Public Expenditure.

The latest opinion poll released today by Red C for RTE Radio shows a small drop of support of 3 per cent to 21 per cent for Sinn Féin. Despite this they remain the second most popular party in the State though Independent politicians and Others polled higher at 28 per cent.

However support for Sinn Féin leader Gerry Adams was down 7 points from June to 21 per cent. There has been increasing disquiet surrounding his leadership over links to child abuse and paramilitary activity.

Mr Doherty refuted claims that Mr Adams was a liability to the party saying that the “longer he stays in the party the better” and that “he brings huge, huge qualities to the party. When he does go as leader of the party it will be a loss to us.”

The former senator reiterated that he has no ambitions to succeed Mr Adams. If Mr Adams were to offer him the leadership tomorrow, he said he would turn it down saying, “I’m not in a position to do it. I simply wouldn’t be able to do it. I’ve no ambitions to do it.”

Nobody in Sinn Féin has leadership ambitions, he claims. “There is nobody in Sinn Féin, unless I am completely mistaken that wants to be, that is bidding to be, the leader of the party. That is not what the focus is.”

He accepted that this was unusual within politics but that there are “differences” between Sinn Féin and other parties.