Fianna Fáil would not abolish USC despite its unpopularity with voters, says party leader 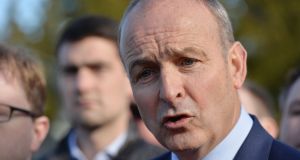 Fianna Fáil leader Micheál Martin has claimed Fine Gael always knew that abolishing the Universal Social Charge was not going to happen because the money was not there to achieve that. File photograph: Alan Betson

Fianna Fáil leader Micheál Martin has described as “false promises” a pledge by Fine Gael to abolish the Universal Social Charge in the run-up to the 2016 general election.

Mr Martin claimed Fine Gael always knew that abolishing the charge was not going to happen because the money was not there to achieve that.

He said that Fianna Fáil, if elected to office, would not abolish USC – despite polls consistently showing it is unpopular with voters.

“I have said to people on the doorstep it will not be abolished over the next five years either.”

He said that sorting out issues of housing and health as well as bringing in measures to tackle climate change would involve major expenditure by the State.

“We have to be honest with people. We can’t [abolish USC],” he said.

One of the commitments in the Fine Gael manifesto in 2016 was to abolish the charge.

Speaking during an end-of-year interview, Mr Martin criticised the commitment as baseless.

“I think they’re very false promises made in the last election by Leo Varadkar and by Fine Gael – that they would abolish USC. That was never going to happen because the money was never there to do that.”

He compared the pledge to the promises made in the recent British general election.

“What stunned me with the British election was, both parties promised billions and billions.

“I think we’re hopefully going away from that in Ireland,” he said.