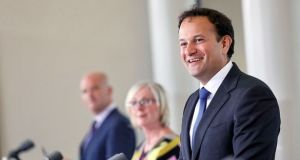 Tánaiste Leo Varadkar said testing in the meant factories ‘hasn’t been cancelled. It’s been rescheduled for next week.’ File photograph: The Irish Times

Testing for Covid-19 in meat and food processing plants was halted because testing demand in the community and hospitals “nearly trebled” on Monday, the Tánaiste has said.

Leo Varadkar told the Dáil there was a requirement for 16,000 tests when there is capacity for 15,000 a day with 13,000 in the community and 3,000 in hospitals. The demand on Monday was three times what it was last week. “And while demand has fallen back since Monday it is still quite high.”

He was responding to Sinn Féin finance spokesman Pearse Doherty who described the decision as “incredibly reckless” and “short sighted” when there are four clusters in factories where outbreaks were a key factor in locking down Offaly, Laois and Kildare.

Mr Varadkar stressed that testing in the factories “hasn’t been cancelled. It’s been rescheduled for next week.”

He said at times of high demand patients with symptoms need to be prioritised and “that’s what happened the last couple of days”. Anyone “in a nursing home, or a meat plant or a direct provision accommodation centre has symptoms, they’re prioritised too”.

Some 13,000 factory tests have been carried out since August with 34 cases detected in people who were asymptomatic.

Mr Doherty said “we’re told time and time again, that there is a capacity for 100,000 tests per week, that we know that we’re not using all of that capacity”.

The Donegal TD said the mass testing of all workers was set to begin on Tuesday but instead “workers at the factory received a text message informing them that the agency had ceased Covid-19 testing with immediate effect”.

He said the Minister for Agriculture was on radio on Wednesday announcing that serial testing in meat plants had started and the first round would be completed by the end of the week but “we know that these tests had already been cancelled”.

He asked who made the decision and if the Ministers for Agriculture and Health were made aware of it.

The Tánaiste said the Health Service Executive made the decision but “I don’t know at what point the various Ministers were informed”.

Mr Varadkar then said rates were higher in Northern Ireland and Belfast has a higher incidence than any other city in Ireland.

He asked Mr Doherty if any Sinn Féin members would resign in the wake of the social distancing controversy over veteran republican Bobby Storey’s funeral in Belfast.

Sinn Féin Northern Ireland leader Michelle O’Neill acknowledged on Thursday on RTÉ that public health messaging during the pandemic was undermined by her attendance at the funeral.

The Tánaiste welcomed Ms O’Neill’s comments. He said they were “late but timely” as winter approaches.

He said he could understand people paying their respects in the streets but “I can’t understand or accept the political rally in Milltown cemetery. This was no graveside oration Mr story was cremated on the other side of town. It was a political rally in the middle of a pandemic organised by Sinn Féin and other republicans.”

Mr Varadkar said Mr Doherty spoke at the rally and he asked if he was going to apologise for that.

“We’ve seen a dozen resignations as a result of Golfgate in the last few weeks. Will anyone in Sinn Féin be resigning as a consequence” or did Sinn Féin believe republicans “are some sort of higher caste, that don’t have to obey the same laws as anyone else and don’t have to follow the public health guidance”.

Mr Doherty did not respond to the intervention but asked about meat plant testing when Minister for Health Stephen Donnelly had said almost 70,000 tests had been completed last week which meant there should be capacity for nearly 30,000 more tests.

The Tánaiste pointed out that the demand on Monday was for 16,000 tests when daily capacity is 15,000.