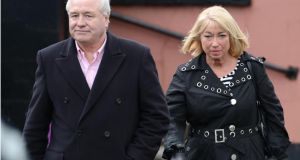 Former newscaster Anne Doyle has spurned an approach from Fianna Fáil to contest the European elections next year.

Ms Doyle, who retired from RTÉ almost two years ago, is understood to have been sounded out by an intermediary as to whether she would have any interest in running for the party in Dublin.

Fianna Fáil has no TD in the capital and lacks a high-profile national figure to contest a European seat here next May. No date has yet been set for a convention. The matter is unlikely to be settled until the new year.

While there continues to be speculation in party circles that Ms Doyle might allow her name to go forward, a source close to her was quick to dismiss any suggestion that she is preparing to run. “It’s untrue,” the source said.

There was no formal proposal to Ms Doyle from party leader Micheál Martin or from party headquarters, it is understood.

Former senator Geraldine Feeney is the latest figure to declare interest in the Dublin nomination to colleagues. Others in contention include Tiernan Brady, a gay rights activist, and Mary Fitzpatrick, a city councillor.

While Senator Averil Power is another prospective candidate, activists believe her priority is the next Dáil election.

The position of former minister Mary Hanafin remains unclear. She is believed to have expressed an interest within the party itself but has yet to declare her intentions publicly.

Within the party leadership there is little enthusiasm for a potential tilt at the nomination from Ms Hanafin.

Second nominee
The hunt for a candidate in Dublin comes alongside its search for a second nominee in the South constituency to contest the seat held by Liam Aylward, who announced his retirement yesterday.

“It is now time for new candidates to make their contribution,”said Mr Aylward, an MEP since 2004 and a TD for 30 years before that.

He is perceived to be willing to contest the constituency but sources believe he would prefer a clear field with no running mate.