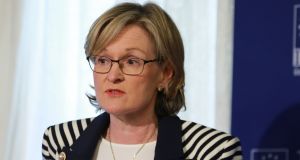 Fine Gael’s Mairéad McGuinness has topped the poll in the European Midlands North West constituency in a resounding victory with 22 per cent of the vote.

The 59-year-old sitting MEP, first elected to the European Parliament in 2004, received 134,630 first preference votes, exceeding the quota by some 16,000 votes in the four-seater constituency.

She came in well ahead of Independent Luke “Ming” Flanagan, who received 85,034 first preference votes, and her running mate Maria Walsh, the former Rose of Tralee, who received 64,500.

There were poor performances from Fianna Fáil’s two candidates in the constituency, Brendan Smith TD who received 42,814 votes, and Anne Rabbitte, who received 30,220.

In the second count, Ms McGuinness’s votes will be recounted to determine the destination of the second preferences of voters who picked her as their first choice. This is likely to take between six and eight hours.

Ms Walsh, as her party colleague, is expected to be main beneficiary. Tallies of a sample of 3,404 votes over the weekend showed that she would pick up 40 per cent of Ms McGuinness’s transfers.

The second count is expected to take up the remainder of Monday with the expectation that the second and third seats may not be filled until Tuesday and possibly Wednesday or Thursday for the final seat.

Ms McGuinness, a former journalist and TV presenter, has built up a prominent international profile from her commentary on Brexit on British and European media.

She felt that Brexit and her profile from arguing against the UK’s departure from the EU without an agreement made her a popular candidate among voters in this election campaign.

The heightened political uncertainty in the UK has put the manner and timing of Britain’s exit at the top of the political agenda again.

“Perhaps with Brexit in the background, they wanted to make sure we would not be damaged by the issues,” Ms McGuinness said on Sunday night after it became clear that she was expected to top the poll.

Asked whether she was looking forward to another spell with Brexiteer Nigel Farage in the European Parliament, she said: “I’d rather eat razor blades.”