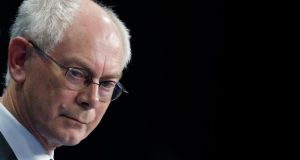 The outgoing European Council president Herman Van Rompuy says the decision not to set national emission targets at this point was taken at the behest of member states. Photograph: Christian Hartmann/Reuters

Taoiseach Enda Kenny has described the decision by EU leaders to recognise agriculture in the EU’s next climate change package as a “major breakthrough” for Ireland. “The situation that Ireland had to deal with over the last number of years was one that was unachievable,” Mr Kenny said at the end of a two-day summit in Brussels at which EU emissions targets for 2020 to 2030 were agreed.

Mr Kenny said that the discussions that had been held by Irish officials, Ministers Simon Coveney and Alan Kelly over the last few months, as well as the input of organisations such as Teagasc, were of crucial importance. “The outcome means there will be coherence between the EU’s food security and climate change objectives and that’s important for Ireland,” Mr Kenny said.

The agreement to include agriculture in the EU’s next climate change package essentially recognises Ireland’s heavy reliance on agriculture so the future build-up of the dairy sector can proceed without running the risk of EU fines for increasing emissions of methane gas.

The official communique issued by the European Council yesterday includes a specific reference to the agriculture sector, stating that the “multiple objectives of the agriculture and land use sector, with their lower mitigation potential, should be acknowledged, as well as the need to ensure coherence between the EU’s food safety and climate change objectives”. It adds that the European Commission should examine “the best means of encouraging the sustainable intensification of food production, while optimising the sector’s contribution to greenhouse gas mitigation and sequestration, including through afforestation.”

Ireland had argued that the country’s forests, boglands and other habitats that absorb carbon should be accounted for in the calculation of greenhouse emissions.

Under the deal agreed yesterday morning, the EU is committed to an overall reduction of emissions by 40 per cent, compared with 1990 levels, a 27 per cent renewable energy target and a 27 per cent energy efficiency target. While agreeing on EU-wide targets, they deferred talks on specific national targets until after a UN climate conference in Paris in December 2015.

Outgoing European Council president Herman Van Rompuy said the decision not to set national targets at this point was taken at the behest of member states.

The Irish Farmers’ Association welcomed the deal, noting the carbon footprint of Ireland’s beef and dairy sector is among the lowest in Europe.

The Irish Wind Energy Association said the EU package meant Ireland was “strongly placed” to tackle its own dependency on imported fuel and to continue as a European leader in renewable energy.

Greenpeace criticised the package, arguing that the deal would “slow down efforts to boost renewable energy and keep Europe hooked on polluting and expensive fuels”.