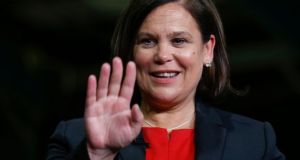 Sinn Féin leader Mary Lou McDonald has also called for a reversal of a decision to cut the PUP payment to € 300 for those previously eligible for up to € 350. File photograph: Crispin Rodwell

Sinn Féin leader Mary Lou McDonald has said it would be “entirely wrong” to remove the pandemic employment payment from third-level students.

Ms McDonald has also called on the Minister for Finance Paschal Donohoe to reverse a decision to cut the PUP payment to €300 for those previously eligible for up to €350.

The Sunday Times has reported that senior ministers are to review whether third-level students can continue to claim the payment which amounts to more than €24m a month in total.

Speaking on RTÉ’s The Week in Politics, Ms McDonald said that this would be “entirely wrong”.

“Bear in mind these are students that have part time work, they’re being denied access to that work because of the pandemic,” she said.

“These are students who in many, many cases have to pay their way through college.”

“I think the very reason to extend and to maintain the payments is the fact that we are still in the grips of a crisis.

“The smart thing to do socially and economically is to support those workers and their families. And €350 is not a fortune, all of that money that goes into the pockets of those families goes straight back into the economy because it is literally paying bills and putting bread on the table,” Ms McDonald said.

“What they’re doing will undoubtedly cause not just hardship but what MABS has described as a forthcoming tsunami of domestic debt. That’s not a smart thing to do socially or economically. Paschal (Donohoe) will have to change his position because it’s the wrong position,” Ms McDonald added.

1 Nearly 400 Brazilians have tested positive for Covid-19 in Ireland, data shows
2 One hundred Irish retailers for all your online Christmas shopping
3 Covid-19: Pressure over breakdown in tracing system intensifies as State enters Level 5
4 Life under Level 5: Where can I go, who can I see, what is closed?
5 Miriam Lord: All test and no trace makes Jack a very ill boy
Real news has value SUBSCRIBE