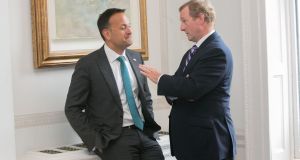 Enda Kenny has maintained a strict silence since stepping down as Taoiseach exactly a year ago this week, but yesterday saw his first major intervention into public debate as an elder statesman.

Speaking at a lunch in the Shelbourne Hotel, Dublin, Kenny said he is “appalled” by the current state of British politics. The Mayo TD was addressing a gathering of the European Movement Ireland, which named him European of the Year. The award was presented to Kenny by his successor, Leo Varadkar.

1 Late Late Toy Show duet with musical hero ‘absolutely mad’ says delighted teen
2 Ireland’s teenage pariahs: ‘We are really at breaking point now’
3 Coronavirus: 243 more cases, seven further deaths reported in the State
4 Waterford turn Kilkenny upside down and inside out
5 Jim McGuinness: There is a way to save championship and make it competitive
6 Tom Barry showed great military expertise, says historian
7 Late Late Toy Show: Music, tears, Tubridy’s F-bomb and €5m for charity. What a night!
8 Ireland in precarious position as third Covid-19 wave could be more deadly, Nphet warns
9 Fintan O’Toole: To counter vaccine sceptics, we must understand them
10 Shot, bayoneted and clubbed: the ruthless lengths the IRA went to at Kilmichael
11 400 – yes, 400! – Irish retailers for all your online Christmas shopping
12 'It just doesn’t feel safe': The restaurants that will not reopen in 2020
13 Basic income for all: Has the Covid crisis given us a new economic model?
14 Hotels, retail, hairdressers, churches, gyms to open next Tuesday
15 Sordid murder of hurling brothers still resonates in south Galway
16 Klopp furious as injuries mount and VAR decisions prove costly
17 US court rejects Trump’s attempt to block Biden win in Pennsylvania
18 David McWilliams: We need to reinvent our empty city car parks
19 Aoife Noonan’s How to be a Better Baker Part 5: Fruity tea loaf
20 Man arrested over murder of Seema Banu and her two children
21 Miriam Lord: Helen McEntee holds up well for someone with barely a leg to stand on
22 Waterford’s frenzied waves of attacks too much for Kilkenny
23 Brexit: UK seeks to strip EU fishermen of 80% of fish caught in British waters
24 Michael J Fox: ‘In the wheelchair, I’m luggage. No one listens to luggage’
25 More than €6 million raised during RTÉ Late Late Toy Show
26 Helena Bonham Carter: ‘People choose to sleep with powerful people. I got two children out of it’
27 The kitchen smells of rum. Either my old dear is over or Sorcha’s baking a Christmas cake
28 Older men’s fixation with younger women really boils my kidneys
29 Only way is up for Stripe as valuation skyrockets
30 David Humphreys: Georgia simply can't be dropped in at the deep end
31 Viggo Mortensen: It ‘felt awkward’ replacing Stuart Townsend in Lord of the Rings
32 One man dies, five injured after partial building collapse in Tralee
33 Pubs forced to remain shut will be given additional €15,000 in State supports
34 Penneys reopens and plans for 39 consecutive hours next week
35 ‘Covid has made my relationship boring and I want to end it’
36 ‘I don’t need to do any of this. . .I don’t actually need to work.’
37 Government settles on Covid strategy after 'Battle of the Spreadsheets'
38 How to hold a referendum on Irish unity
39 The Crown’s Josh O’Connor: ‘I’m a republican. I’m not interested in the royal family’
40 Beauty gifts for the people you just don’t know what to buy for
Real news has value SUBSCRIBE